Up and up he sailed through the sky;

“Uh-oh,” he thought, as leaves rushed by.

So hard to reach – as he swayed past the tree.

Buzzing right around his ear.

At his good friend with stuffing inside.

And he got Pooh down; at last he was freed.

“I didn’t mean to make the bees mad.”

“Well, why not just say so?” said Christopher R.

“You certainly needn’t have gone quite so far.” 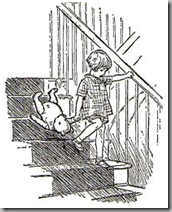 “Perhaps I will,” and he turned with a tug;

“Do you have any?” he asked his good friend,

So his story here comes to a fine end.

Curled up home with honey:  safe, warm and snug.

There’s a right way and wrong, Hashem says this week;

For Aharon’s sons taught the lesson we seek.

There’s a time and a place for every good thing;

Korbanos are great when Hashem says to bring,

If not, a punishment too scary to speak.

Tzaddikim both, but his sons kind of blew it.

Hashem taught them how, and surely they knew it;

Unlike Pooh, they both had brains inside,

Thought they were great – “so hurry, let’s do it!”

Hashem is a good friend on whom we rely;

So we want and we ask and we heed His reply.

All Pooh had to do was to ask a friend;

And honey was his very sweet end.

But true sweetness is knowing Hashem is nearby.