I saw this book online and thought it was right up GZ’s alley.  I wasn’t really sure when to pull it out, because it looks a bit old for him (it has spaces to write in the blanks), but I did during a quiet time today and he quite enjoyed it.

It kind of fills the same niche that his “Building the Alphabet” thing did a couple of months ago, but allows him to do more advanced things – even without curves.

I don’t know if he remembers the rods really well (he hasn’t touched them probably in the last year, since Naomi started doing “serious” math with them), or just has an astonishingly intuitive spatial sense, but a couple of times, he was able to figure out right away which colours of pieces would fit in which spaces. 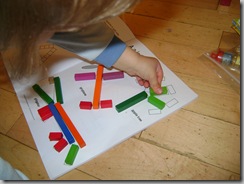 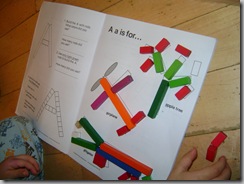 “Airplane” would not have been one of my top picks for “A” words, as it’s not phonics-based, but oh, well.  I’m just so hoping he won’t have the confusion over letter sounds that has slowed Naomi down a bit this year.

Anyway, this is a fun activity that I would definitely do with him again, though I doubt I would buy the book if we didn’t already have a huge stash of rods that I wanted to start him getting familiar with.  As it is, though, I figure this is a great way to kill many academic birds with one fun stone.