Two pics from the Smile Factory

GZ had fun sorting our days of the week!  Because this is high up on the mirror, I never thought of it as a manipulative at all.  But he’s been able to “read” them for a long time now (mostly guessing from the first letter), and while he was choosing Monday’s, he put himself to work organizing them for me! 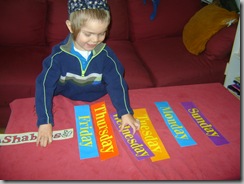 I won’t post every single lesson, but this was our SECOND lesson in Draw Write Now, and it went just as well as the first.  I had the brilliant idea of “test-driving” the new drawing on the whiteboard before committing it to paper.  I also invested in a bunch of nice, sharp pencils despite my primal loathing of pencils.

Both were excellent ideas, and the lesson went well.  That was yesterday; we’ll repeat it tomorrow – this time with “scenery,” fully-coloured, maybe a couple of different sizes of pigs.  Oh, and I will insist she NOT write the name of the pig on its belly… just for realism’s sake.

Here’s the whiteboard version, before we did it on paper.  Yes, she drew this pig herself, following the careful, step-by-step instructions! 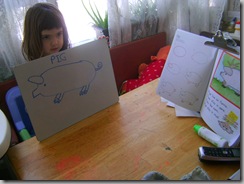 Well, I may still be hopeless, but just watch me draw a hen and a PIG!!!