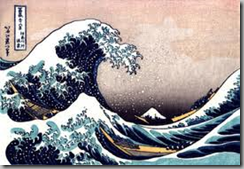 Reading about the tragedies in Japan in Staying Afloat’s beautiful post over at And miles to go before I sleep….  She wrote about how thankful she feels for ordinary miracles now, but she ends by asking, if, like her autistic son, we don’t all ultimately “want a predictable world.”

I don’t know about that.

In terms of predictability, we do and we don't want it.

If you gave most non-autistic people a choice, they would like SOME variability, some unpredictability.  When we do the same thing over and over, we are less alert; we pay less attention.

When it is friendly, randomness charms and amuses and delights us.  Things pop up in our path, like the strange travel suggestions that are dancing lessons from God (as Kurt Vonnegut wrote), and we call it serendipity and embrace them.

But when it is fierce, when it is a tsunami, randomness can upset our whole conception of an orderly, governed universe.

Is that a mashal [parable] for a tsunami?  I don't know.  I don't want it to be.
It would be awful to suggest that Hashem shakes things up to keep us creative, to  keep us on our toes... to keep us paying attention to His creation.

To me, that mashal is too easy; too reminiscent of the fickle and arbitrary Greek gods.  Nope… it's not that simple at ALL.  But if that is an unintended consequence, then perhaps it is some small good which has come out of this great tragedy.