In case I was expecting a nice farmyard illustration for today’s follow-up Draw Write Now lesson on pigs – well, nope.

What I got instead is basically an anatomically-correct piggy variant of her perennial theme:  having a baby.  (see this earlier drawing, which is basically the same picture only with humans) 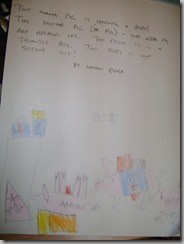 She no longer believes babies come from belly buttons, following a frank discussion a couple of weeks ago.  She only kind of suspected the belly-button region, which I think I read is psychologically known as “upward displacement” (?) – where it is too uncomfortable to imagine that the baby could come from anywhere lower, so the child suspects the higher, more innocuous opening.

When I say explicit, if you look very closely, you’ll see that everybody but the baby has the correct nudie-bits, even though Draw Write Now doesn’t provide them.  It’s a female doctor, of course, wearing a name-plate / saddle-thing that reads “Dr. Pig”.

Sigh… maybe next week, we’ll get a nice pastoral landscape out of this girl when we do sheep.  Or perhaps just a SHEEP labour-and-delivery scene.  You never know!