Head of the class! (depending on which class) 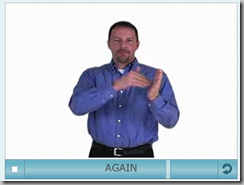 I’m sure you know that shining moment when everybody in the class is staring in your direction, open-mouthed?  When the teacher, a mad bald, white-bearded, pot-bellied tiny deaf man, is gesticulating frantically in your direction as if you were Einstein himself?

We all get that from time to time, right???

So what did I do to deserve it in my signing class tonight?

He does this thing where he goes around the circle and points to each student and you have negative three seconds to sign a word:  in this case, it was occupations.  And this was our THIRD time around, so we’d exhausted all the easy possibilities. 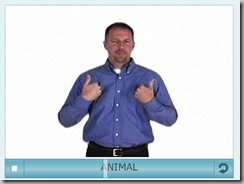 I had already signed “doctor” and “bank teller” (it had been done, so I had to guess again) and “security guard” and frankly, I was sniffly from allergies, feeling LOUSY.  So when it came back to me and every profession anyone had ever heard of had been taken, I lazily stuck the sign for ANIMAL in front of the sign for DOCTOR.  Two basic signs any kindergartner would know.

Well, the teacher lit up at this amazing “brand-new” career possibility!

But the problem was that, excited though he was, nobody else knew the sign for animal.  So the entire class was staring at me cluelessly while the teacher did his little man’s jig-of-glee.  They sit there signing AGAIN,  AGAIN, AGAIN. And he doesn’t let us write it on the board.  And he doesn’t let us fingerspell.  So that just leaves two options:  act it out or use ASL signs.  I opted to use signs:  I signed “DOG DOCTOR”, “CAT DOCTOR” and, when some still looked clueless, “FISH DOCTOR.”  By this point, some people had figured it out, but the teacher was urging me to keep on explaining.  Sheesh.

So on I went, through every animal name I could think of:  SNAKE DOCTOR, ELEPHANT DOCTOR, TIGER DOCTOR, COW DOCTOR, GIRAFFE DOCTOR, HORSE DOCTOR, HIPPO DOCTOR.  It really was a very silly recitation.

Finally, I ran out of animal words, and the teacher summed things up, unnecessarily, by pointing out that we’d heard thirty or however-many career-words and ONLY ONE was brand new.  ANIMAL DOCTOR!  I truly am brilliant; somebody ought to tell my children.

I tell myself I deserve a moment in the sun to make up for my hour in the shade on Monday night in my Step class, where I am so far out of my league, over my head, etc., that I am basically doing a different class from the other ladies there some weeks.

I’m improving, or so I’d like to think, but this week, she decided to do some type of masochistic speed-drill crazy multi-station-of-doom workout, where we spent one minute on each of 16 steps, doing a different type of exercise on each one.  One step with weights, a couple with resistance bands, but most for good old-fashioned huffing and puffing up and down.

The first circuit wasn’t too bad, but when she announced that we’d do a second one, my legs were literally going wobbly and I thought I was going to die or puke or pass out.  Brought back all my worst gym-class memories ever, like the nerdy lack of ball-eye-hand coordination that made me the literal last pick for any team.

Right down to the goody-goody super-achiever teacher’s pet who pointed out, as my heart was CLANGING in my chest and my legs were barely holding my weight, let alone chugging up and down onto the step and back, that that station was SUPPOSED to be for – well, I don’t know:  L steps or Butterfly steps or tiara-top twirlies – who knows???

I huffed back at  her that my legs were moving and if I tried the REAL exercise, I would die and she would have my corpse to contend with since I’d be blocking her turn to get at the step.  Did I mention she looks like she’s about 18 years old???

The teacher also tried pulling that on me - “that station is supposed to be for FAST!” (we were supposed to jog up and down the step as fast as we could for the whole minute).  But I just snarled, “I’m moving, aren’t I?” and she moved on to torment her next victim – except there WERE none because I am literally the only pathetic one in the class.

Bet you didn’t realize I’d dropped my nice, tame Thursday-evening aerobics class for this militaristic hour in Lady Gaga hell (ie it would be hell for someone who didn’t like Lady Gaga, but the truth is – don’t tell my kids – I kind of do)!

I sure like getting it over with on Monday evenings, and I sure like the energy I will theoretically have the rest of the week once I get into the groove of this class.  But I sure hate feeling like the class dumbkopf.  So maybe I should just bask in my signing class moment in the sun and enjoy the accolades I’m raking in, just for knowing a whole bunch of useless nerdy kindergarten animal names.