As you may not have known, if there’s one thing I cannot resist, it is semi-nude Asian men smacking a REALLY big drum.  Wish I weren’t serious, so please stop smirking.

Specifically, I am referring to the Kodo Drummers.  My ex-husband turned me onto this more than twenty years ago.  The Kodo Drummers live and train on an island in Japan, and have also been touring continuously (the “One Earth Tour”) for 30 years now.  (I assume some stay and train while some tour)

I heard them once with my ex-husband, and I also went once with Ted a few years ago.  It is the most amazing performance.  Not so much the flutey/shamisen-type stuff; I’ll be honest and admit I’m there for the DRUMS.

Anyway, they’re coming to Toronto again – this Friday night.  Blah.  So who knows when I’ll get to hear them again?

I suppose it’s about the noise.  Maybe I’d also enjoy STOMP or any one of a million imitators.  But I don’t know.  There’s a heck of a lot of precision and ceremony, and then, too, there’s that great big huge DRUM.  The instruments are so big that many must be shipped by boat from Japan. 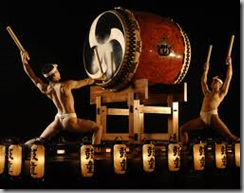 Here's a video that utterly fails to capture the experience of hearing the drums live.  It looks like some guys (and these days, girls) banging stuff, but believe me – it’s more than a concert:  it is a feat of athleticism, and it is PRIMAL.  This is the kind of show I can imagine some deaf people really enjoying.

It is hard to imagine ever growing tired of seeing and hearing this kind of drumming.  So I’m definitely eager to hear them again – but actually not all that disappointed to miss them this time around.

It’s funny; I have lost out on a number of experiences over the last few years due to Shabbos:  David Sedaris immediately comes to mind (I’m a HUGE fan and would die to hear him live!), but there have been a few other “cultural milestones” that I really wanted to join in on and couldn’t, because of Hashem’s weekly reminder that this isn’t really my culture.

And the weird thing is, I don’t resent it at all – even a tiny bit.  At the risk of sounding smug, I feel this is something I have conquered in  myself.  It has taken a VERY long time.  I remember “sneaking out” on Shabbos years ago; I doubt it would ever occur to me now.

But now I wonder, cynically, but fleetingly:  is it truly because my circadian rhythms have settled into this Jewish way of life… or just because I’m old and tired and don’t care as much about anything?

Well, let’s stick with the high-falutin’ spiritual one until proven otherwise!  But if you’re in Toronto and you’re NOT Jewish, it’s THIS Friday night!  (If you’re not in Toronto, visit their site for dates year you.)  Check it out!  They’re amazing!!!