Building a Mishkan with Pillars of History 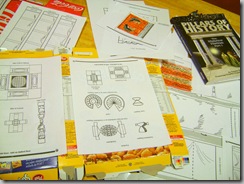 This week’s project:  to wrap up Sefer Shemos and the various bits and pieces we have learned through the weekly parsha that have to do with building the Mishkan (desert tabernacle), Naomi Rivka and I are working on this super-jumbo Mishkan “tabernacle” building project from the book Pillars of History.

When I bought this book online, I thought it might be a mistake – learning Torah from a non-Jewish point of view???  The book itself has put my mind at ease, somewhat.  There are still surreal bits, like a mini-book that points out – hurrah! – that the Torah is still read in synagogues around the world.

I like that the book uses the word Torah.  As a whole, however, the lessons have a definite “goyish” feel.  For one thing, the lessons don’t respect parsha boundaries:  some span two or several parshiyos, while the “Baby Moses” story is a lesson in itself.  Since Jews follow the parsha order, Moses grows up in the same parsha in which he is born, so there’s rarely a focus on his infancy.

Also, the worst bit:  much of the Torah is simply missing – the bits that don’t make good “story,” like everything that comes in between the 12 spies and and Joshua leading the Jews into Jericho.  Jews learn those sections anyway.  They’re ours, and they’re important:  little things like keeping kosher, different types of korbanos (offerings), and all the teachings of Moshe’s last speech to bnei Yisrael.

Also, unlike Jewish resources, the book never uses the word “us” to describe the people the events are happening to and about.  It uses the word “Hebrews” sometimes, but does mention, in a mini-book about the festivals, that they were given to “the Jewish people.”  So there’s naturally a distance created between the reader (teacher) and the subject.

Finally – Bible memory work.  There are suggested memory verses for each of the lessons, and I doubt we will use these at all.  For some reason, most Jews don’t memorize the Torah, particularly in small single-verse or several-verse chunks the way Christians seem to so enjoy doing.  In some cases, we highly respect those who HAVE memorized it, but that’s usually somebody (like Yerachmiel Meir, in some cases!) who can lain an entire perek (chapter) or parsha from memory, given the first couple of words.

Still and all:  this seems like a useful book.  Along with the actual lessons, which can probably be aligned with certain parshiyos, there are mini-books in the back with cultural and anthropological information about Biblical civilizations.  One of the mini-books deals with parallels between the plagues and the gods of Egypt – I never realized, but apparently it’s a common Christian teaching, that each plague was a middah-k’neged-middah (measure for measure) “back-atcha” to one specific Egyptian god.  Fascinating!

Some of the material will be more helpful for our Story of the World history (like the Abraham and Egyptian information and mapwork) than for parsha study.  Nevertheless; I bought it on sale, and for what I paid, the book presents Biblical material in a vibrant, kid-friendly, lapbookish kind of way that I haven’t seen done well in a Jewish context. 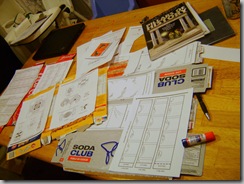 For that, at least, I think it will be worth having around.

I’m planning to cut out and have Naomi colour these Mishkan pieces during the week, and then, hopefully assemble them while Gavriel Zev is at the Sunday drop-in program with Elisheva this weekend.  Hopefully, I’ll have better pictures for you then!