New this week – not that I know if anybody is reading these:  I have given up on translating the terms into Hebrew characters.  It was just getting too time-consuming; typing in Hebrew is easy, but adding the vowels – as I had started doing – really isn’t.  If anybody is reading these things, feedback is welcome.  I’d love to think these summaries were helpful to anyone besides me and my kids! 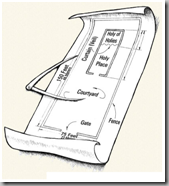 Do you remember what Hashem told us to do in last week's parsha?

Last week, in Parshas Terumah, Hashem gave us instructions to build… (a Mishkan)!

Hashem told Moshe that if we built a Mishkan... (He would come live with us there!)

Those gifts would come from… (all the people, not just the wealthy people or the leaders)

But bnei Yisrael wouldn't put the Mishkan together for almost a year!  There was still a lot to learn…

When the Mishkan was built, Hashem wanted one group to be the leaders there… (the kohanim)

For the first kohen gadol when the Mishkan was built, Hashem chose… (Aharon, Moshe's brother)

All the other kohanim would also come from… (the family of Aharon).

Hashem wanted all the kohanim to dress the same way!

All those people wear uniforms when they are… (doing their jobs!)

A uniform tells everybody right away… (what job they do) - it also says… (they are proud, and trying to do a good job)

(this is true even for a school uniform - school is a student's job, and hopefully he or she proud of their school!)

The kohanim were proud to do their important job in the Mishkan!

There were four clothes that every kind of kohen (even the kohen gadol) wore:

·         Migba'as, a tall hat made of a long strip of fabric (have you ever seen a person from India wearing a turban?)

The kohen gadol had a hat called the… (Mitznefes) - it was the same fabric strip, wound into a "bun" shape.

The kohen gadol was supposed to look different from all the other kohanim.

There were four extra parts to the clothing of the kohen gadol:

·         The Me'il, an all-blue robe worn over the kesones, with bells and pomegranates all around the hem

·         The Efod, a colourful apron to tie backwards around his kesones

·         The Choshen Mishpat, a woven rectangle, folded in half and worn in front, covered with twelve jewels

·         The Tzitz, a small rectangle of gold with the words "kodesh lashem", worn over his forehead

"Kodesh" means… (holy, special to Hashem!).  The Tzitz reminded him that… (everything he did should be holy!)

The Kohanim couldn't just get into their clothes and start working!

First, Hashem said, they should… (get themselves ready and get the mishkan ready)

Korbanos are a little like medicine, because… (they "heal" bnei Yisrael's connection to Hashem)

There are two ways to use medicine… (healing a person who is already sick, and keeping a person healthy every day)

In Tetzaveh, Hashem gives instructions for korbanos which… (would be brought every day to keep bnei Yisrael "healthy")

Today, we keep ourselves connected to Hashem with… (our careful and regular tefillah, which is like a korban)

One special kind of korban was ketores, the incense - special smells - that were burnt on a small golden mizbeach.

Why didn't we learn about this mizbeach in last week's parsha, with the big copper mizbeach?  The Ketores burned right away with a sweet scent Hashem loves.  It's separate from the other parts of the Mishkan to remind us to pay special attention to the sweetest, most wonderful parts of being Jewish!

Unfortunately, bnei Yisrael decided to take on a “building project” that was quite different from the Mishkan… as we’ll see in next week’s parsha, Ki Sisa!