Now sharing on 4Shared, so if you’ve had trouble in past, try it now (I apologize for 4shared’s 20-second delay)!

Aharon’s Story:
“Make us an idol!” the people cried, when Moshe was long gone.
“He’s just a guy who’s served us well, but it’s time for us to move on.”
I hemmed and I hawed, I didn’t know what Hashem would want me to do,
And finally, I thought I’d stall them ‘till Moshe himself could come through.
“Who has gold?” I asked of them, expecting that they would quail.
But instead, they came, hands full of gold, each man came without fail.
“Where’s it from?” I asked but I already knew deep inside,
They’d ripped it from their wives’ own ears, a place they couldn’t hide.
“I’ll have no part,” I said, “of this,” but my life was on the line.
If I didn’t make them an idol now, the head they’d have would be mine.
If I throw the gold in the fire, I thought, then we’d see what occurred;
Perhaps the gold would just disappear – the outcome that I preferred.
“Now look!” I shouted and cast the gold deep in the fiery flames,
Looking around to see who watched – knowing Hashem knew their names.
But what do you think sprang from the fire?  A calf, glowing and warmed,
And all of those people stood about, staring at their gold, transformed. 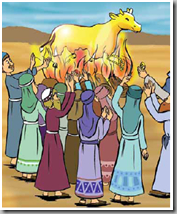 I cried out “Here is Hashem!” to them, knowing it couldn’t be true –
Hoping to show that this wasn’t the One who’d brought their great rescue.
“This is Hashem,” I shouted out, “who brought you from slavery.”
I thought that they might laugh aloud – how crazy could they be?
But instead they woke up early, bright and early the very next day,
“We have to daven, to dance and sing – this calf has shown us the way!”
I stood aside and watched in shock as their prayers grew wild and loud;
I stood at the edge and took it all in, trying not to anger the crowd.

Moshe’s Story:
Well, I was up on the mountainside still, speaking closely with Hashem.
“Descend,” Hashem said, “go down and see the evil now among them.”
I walked slowly down the slope, two luchos, engraved, in my hands,
Stopped in shock to stare at the people who’d heard Hashem’s commands.

“How could you do this?” I wailed, and cast down those tablets of stone.
I stood on the hill and I waited and wept – but for Yehoshua, alone.
But then I remembered Hashem’s faithfulness and I knew I had to act.
“Who is for Hashem?” I called; the kohanim rushed to join in the pact.
“If Hashem can forgive these people who stumble and fall, make mistakes,
Then surely I can’t turn my back now, although my heart certainly breaks.
I will return, back up to Hashem, to demand that He spare you your lives;
Remind Him of His holy oath – to our Avos and their righteous wives.”
“Erase me from your book,” I told Hashem, up close face-to-face.
“If you wipe out these people now, it would be the greatest disgrace.”
He’d sworn to our ancestors on His holy name to hold us always dear,
And though I trembled, I stood my ground, hardly feeling my own fear.
As I forgave them, Hashem did too – He granted my deepest desire;
With brand new luchos, carved out myself, not - like the first ones - by fire.
“The Torah is not in shomayim,” I learned, “it’s right down here on earth.”
And so I went down, luchos in hand:  a clean slate, my people’s rebirth.

(images from MiBereshit, a series of parsha sheets and other resources available in numerous languages here)