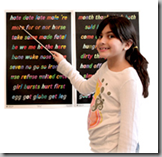 I’ve been slowly working my way through these three rather long math videos.

If you’re wondering whether Cuisenaire Rods could be helpful in your child’s introduction to math, these segments, taken from a 1964 National Film Board of Canada documentary, suggest that they can help ANY child visualize and concretize even complex arithmetical, fractional and algebraic relationships.

The kids in this film certainly act like uniformed little zombies, but I suspect that’s typical of schoolchildren-on-video of the day, and not a result of Gattegno’s methods or the Cuisenaire rod materials.  It’s kind of cute and kind of brainless, all at once.

The film is available in 3 parts.  More math musings after the video segments. 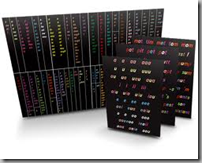 The entire film is hosted and/or scripted by Caleb Gattegno, a somewhat renowned Egyptian/European/Canadian (?)  teacher who wrote extensively on educational theory and developed a Cuisenaire-like system for teaching reading that is the most godawful complicated thing I have ever seen.  I guess that should make me nervous about his approach to math, but somehow, it doesn’t.

Nevertheless, I would love to see one of his textbooks, which are still in print in the UK as Mathematics with Numbers in Colour, and which have been revised (I think) in the US and/or released by the late Gattegno’s company in an updated form as Visible & Tangible Math.

I have been looking for a systematic way of continuing at least some math work with Cuisenaire Rods that isn’t Miquon… but it doesn’t seem like this is it, at least in a homeschool setting, because on neither site is there a hint of how to actually obtain the textbooks, and anyway, I’m not buying anything without a preview.

There are some magnet and/or private schools in the US set up around Gattegno’s principles.  I don’t necessarily want the principles, but I would like to be able to see his methods and/or workbooks up close.

I have just discovered, through this semi-rabid paper about Israeli math curricula, and from other sites, that Cuisenaire Rods are associated with the very, very worst of the hated “NEW MATH” of the 1950s and 1960s.  In the minds of older educators, they are apparently both emblematic and synecdochal – they represent the entire system as a foul whole, and are its hated flag held high over the scrimmage.

I wonder how this all fits in with what Susan Wise Bauer and Jesse Bauer term “parts-to-whole vs whole-to-parts instruction.”  At the grammar stage, they advocate the same parts-to-whole methodologies that bring you phonics-based reading programs vs sight-word-based reading programs.  They’d probably also come out in favour of counting and drill vs intuition and exploration in the Cuisenaire-based programs.

Nevertheless, I can easily imagine ways to make this type of program more rigourous and provide a solid, unimpeachable foundation.  Perhaps Gattegno had the answers.  Meanwhile, tonight’s bedtime reading:  WHATEVER HAPPENED TO NEW MATH?