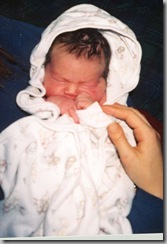 I started this blog when my baby was almost one year old, mostly to blog our suppers.  I later revived it to blog about my garden, crafts (yes, I used to do crafts!) and – what else – more, more, more about the exploits of the Rony Pony baby and, soon enough, her little chicky brother.

Why “Rony Pony?”  People ask because it’s a stupid and unmemorable web address, easily misspelled that has nothing to do with the theme or purpose of this blog.   (I did invest in a better address in case I ever feel like migrating)

Anyway – here’s the answer:  It’s sort of a babytalk diminutive of ROLY-POLY.  You did ask, right?  Or at least, you read this far down the page.  (Spell-check just stopped me from spelling it diminuitive, though that’s the way I’ve always pronounced it.  Can it be true???)

The truth is, I give ALL my babies nicknames – it was basically the first thing I did on meeting each of them in turn.  YM became “pookie-loo”; EC is “boobah”; Naomi Rivka was “rony pony,” and later “choochie” and Gavriel Zev is “chicken pie.”

The nicknames change and morph freely.  Naomi’s was “rony pony”, which changed to chooch-a-pony, and now I mostly call her “choochie.”  Sometimes, I call her “pone-pone.”  Elisheva started out as “Elisheva-beva-boo-roo,” but it later got shortened.

When Gavriel Zev was born, I actually had “nickname block” for the first time EVER.  I looked at him and he just had no name; no nickname came to me.  Maybe it was so hard finding his real name that I didn’t have any extra energy for a nickname.  So I just called him “boychick,” until, gradually (as he grew on me a bit, perhaps), the words switched and I found myself calling him “chickie-boy” and then – suddenly!  one day!  out of the blue! - “chicken pie.”  I sang it to him in a song; I even sometimes call him “chickeny-pie-pie.”  Yes, I’m blushing.

Do I ever call my kids by their actual names???  You bet… but mostly when I’m mad!  Do I call anyone else by nicknames?  No, and I have never wanted or used one myself.

Although I do distinctly remember calling my sister Sara “Sebbie-fish” for a while.  I stopped because it really wasn’t fair to my other sister, Abigail, who had no nickname.  I tried calling her “Ebbie-fish” for a while, but that for sure didn’t stick.  So I dropped both.

You may also enjoy: