I spent the morning in a room full of drunken preschoolers.  Not drunken, exactly, just drugged out of their minds.

The pediatric dentist our dentist referred us to for Naomi’s fillings is like a factory assembly line on “filling days” – I think they schedule them for particular days and definitely for early in the day, because the kids have to be fasting from midnight the night before their dental work.

And that is because of the sedation the dentist uses – also the main reason our regular dentist referred us; he doesn’t offer it in his practice.

She uses Versed (midazolam), which makes the kids almost instantly floppy and incoherent.  Blah.  I hate doing this to my kid, but it’s funny to watch – in a sickening kind of way, like that YouTube video that went viral.

It takes about 30 minutes for the Versed to kick in fully, though it starts to work quickly.  When we arrived, there was one kid stretched out dopey, ready for his appointment.  They gave Naomi hers, and by the time the first kid was done, it was her turn.

I began reading to her in the padded “playroom” nook – as a treat, I’d brought along a Magic Treehouse book, our first (I bought four of them to start us off).  Very quickly, she was up on my lap, first cuddly and then floppy, stretching out and rolling her head around.  Ick.

Must add here – I can’t stand seeing anybody drunk.  Viscerally; it just disgusts me… (yes, almost like my visceral reaction to bad children’s literature!)  And when it’s kids, or puppies, or monkeys, or anyone else who didn’t consciously go out and decide to get themselves hammered:  well… it’s just horrible.  Ugh.

Naomi was holding a Little Mermaid book, but dropped it a couple of times.  The last time I picked it up, she batted at it with her hand and then couldn’t be bothered anymore.

I’d read that it’s a little bit scary for the kid – to suddenly be so disoriented and even dizzy, so I cuddled her and kissed her until it was her turn and by then she was happy to be left in the dentist’s chair for her appointment.

Of course, while she was having her work done, the next kid (a bit older than her) had his turn to get doped up, so I got to hang out and watch him get all floppy and gross while I was waiting.  Ugh – it’s worse when it’s other people’s kids.

The good news is that Naomi’s filling went so quickly that they were able to do tomorrow’s filling at the same time, with the same sedation.  Yay!

The bad news is that it didn’t cost much less – I guess half the cost of two doses of Versed.  And probably half of whatever small toll it takes on her body and spirit.

More good news:  she probably won’t remember much about today’s appointment.  She vaguely remembers having been to the office before (we had two of these done last year), but none of the specifics… oh, except that “they don’t have any good prizes.”

Which is true.  After I’d paid, I went in to claim her and she was riffling through the feeble excuse for a prize box.  There were bracelets and rings and crayons – none of the flashy stuff our regular dentist carries (basically, higher-end bracelets and rings and crayons).  Consider what people pay the pediatric dentist – and considering her slick, child-friendly office – you’d think she would have better prizes.

But boy, was Naomi whiny about it!  I finally told her we weren’t there for the prize and she chose a ring and a bracelet and off we went – her in the carriage, because she still couldn’t walk.  Oh, and me $700-something lighter.

She was looking forward to eating but didn’t have much at first and mostly sat around alternating between sobbing and whacking Gavriel Zev.  Two timeouts later, after she’d eaten a bit and it had time to settle in, her personality improved slightly.  And now she’s fast asleep, where both kids have been for two hours.

Oh… where was GZ all this time, you ask?  They ask you to leave younger children at home if you’re going to be having a sedated kid, but luckily, Elisheva is on vacation this week.  I promised her $20 for two mornings of babysitting, and paid her that much even though it turned out we don’t have to go tomorrow.

So I should say I was $720-something lighter. 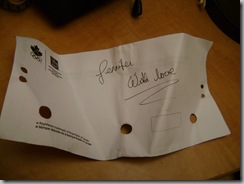 Poignant moment:  I paid part of the bill with the birthday money my mother gave me on Sunday.  I must have looked totally pathetic, ripping open the bank-machine envelope marked, “Jennifer – with love.”

The envelope is empty now.  Guess I’ll throw it away.