Forgot to post these earlier in the week… yes, we homeschool in jammies, some days.  Here was a math lesson that went particularly well, despite the grim expressions on Naomi’s face.  She was very into it, and enjoying herself, I promise! 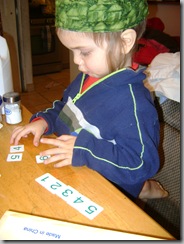 First:  isn’t it just SO true that the best learning takes place when your back is turned?  I left a series of these place value “ones” tiles in front of GZ, and when I turned back, he had sorted them into numerical order.

(like any good Jewish boy:  he did it from right to left!)

Meanwhile, Naomi and I were on the other side of the table (ignore the folded laundry piles, especially any Montessorians out there!) 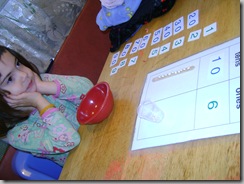 I’d hand her a bowl of (dry!) beans and she’d count them out.  For every ten, she could “trade up” for a bean stick, and stick it in the “tens” column.  Whatever was left over (quantity less than 10), we’d stick in a little l’chaim cup in the “ones” column.  Then, she had to choose the matching numeral tile for each column.

Here’s 16, and 72.  We did many examples, and she didn’t really get tired of it, which made me happy.  She grasps these concepts very intuitively. 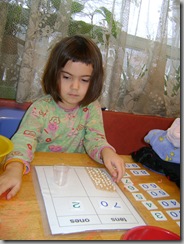 I ordered these place-value tiles from Rainbow a few weeks ago, and I really like them, but it seems that it might be confusing to count SEVEN bean sticks, then have to match that with the numeral “70”.  It feels like that’s skipping an important step.  Plus, if you shove the tiles together, you might conclude that she had 106 or 702 beans instead of 16 and 72.  Not as self-correcting as I might have hoped.

Still, the tiles are sized properly to slide together and overlap one another (see example below) to perfectly form the correct multi-digit numeral.  So I had her count the bean sticks by tens, and then we’d put the 70 or whatever in the “tens” column, and then “slide” it  into the middle along with the “ones” value, and I think it all made sense.

One thing that pleases me:  she has no trouble understanding the “teens” concept, which is supposed to be so problematic for this age group.  Yay! 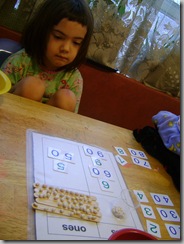 She was very eager to show me this “game” she set up with the bean sticks and numerals, so we took a break for a Little House on the Prairie Math Lesson.

Laura (from Little House on the Prairie) was 90 when she died.  Mary (her blind older sister) was 60.  We know those two numbers, so Naomi put them in the “tens” column.  I think she put 15 beans in the l’chaim cup:  one for every ten years of their lives.  Then, she said, we don’t know how old Ma (still from Little House) was when she died, so we could guess she was maybe 50.  She put that in the “ones” column, along with five bean sticks.  Then, we stared at it worshipfully until she was satisfied that I understood, at which point she was happy to continue with more “conventional” math.

Meanwhile, I did show GZ that he could choose a tile and count that many beans into a l’chaim cup, but he was not impressed… or even all that interested.  Another day:  he’s been playing with the number line and working to improve his own counting, so I think this would be a fun investigation if I get some one-on-one time with him (like maybe while the girls are at the shul’s Sunday program tomorrow). 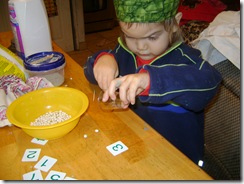 As usual, I love this lesson because it’s low-tech and cheap:  beans and popsicle sticks!  Yes, I bought plastic numeral tiles, but I could have used homemade ones (and have been for “ones” for months).  Yes, I laminated the place value board, because I anticipate that it will get a lot of use, but I could have just scribbled two columns onto a piece of paper.

I also love it because the kids did.  I suppose that’s important, too!