Special thank you to Elisheva for this week’s amazing illustrations!!!

This week’s parsha is the one we call Bo

The parsha where Paroh at last lets us go.

The shortest parsha-name in the world, you know

But just look again at those letters that flow,

Stare at them briefly; they’ll make you say “whoa.”

When you are stuck in a bad status quo

You could hop in your boat and away you could row.

“Life in Mitzrayim is no slice of gateau;

And we’ve been here since it was so long ago!”

In a battle our luck would be more than so-so.”

The Jews, long enslaved, could be strong with a hoe,

To fight back against Paroh, his land overthrow.

But Hashem says simply to Moshe, to “bo” –

“Come back once again to that terrible foe.”

And he sees just the lesson Hashem must bestow.

He knew the Jews must not flee like a doe

Though it’s taken so long to see justice so slow

Through hail and through locusts, we watched from below

Witnessed every miracle and every cawing crow.

As slaves, our lives were full of weeping woe,

Mired in misery, trapped on our plateau.

We all felt degraded, we’d lost our holy glow;

Slowly, then, watching, we began again to grow.

While we waited and watched and kneaded our dough.

Our stay in Mitzrayim had brought us so low,

But the seeds of redemption he'd helped us to sow.

That’s what we realized as we stood there in Go-

shen… and it’s all there, in the parsha we now learn as BO! 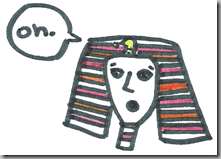