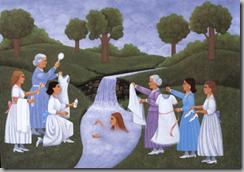 … nope, not me! But an acquaintance has tagged me to start learning with a woman who wants to become candidate for conversion.

I suspect she tagged me because she herself doesn’t want to do it… the person in question is a little bit older, a little bit more weird, a little bit, let’s be honest, more financially strapped than the typical candidate. There’s a good chance she can’t pay, in which case, an anonymous donor will apparently kick in… a process which promises to be a PITA for yours truly.

There is a very formal process for conversion here, as I suppose is emerging in most communities. The requirements definitely seem more formal, and more stringent, than when we went through it eight years ago.

Looking at the key document prospective converts must sign, there also seems to be more of the intention that if you don’t keep mitzvos or something goes wrong after the conversion – like the proverbial (and likely apocryphal) story of the person emerging from the mikveh and shouting out “Praise Jesus!” – it can be nullified after the fact.

Which is a little funny, if not in the ha-ha way, because my ex-husband begged them to nullify his conversion at one point, and he was told it wasn’t possible under any circumstances (he knew it was better to go back to being a goy if you’re not going to keep mitzvos anyway). He was very sad to have to become what he called “yet another non-observant Jew.”

In any event… I suppose if it goes according to plan, we will start at the beginning: Shabbos, Kashrus, Taharas HaMishpacha… well; Shabbos and Kashrus, and we’ll go from there. I have been sent a copy of the final exam – not to share with her, but as a guideline for what to teach. It’s 70 pages long, and a lot of it is kind of rusty, or at least fuzzy, even to me.

Hard: Using a dishwasher for both milk and meat? – um, I thought you couldn’t! Maybe if it’s stainless steel, with different racks? Or maybe it’s a trick question.

Hard: Quantity of dough that is subject to the law of taking Challah? I thought it was a machlokes, so you always take but don’t make a bracha unless it’s truly a LOT of dough?

Hard: Five conditions for returning a pot to a stove on Shabbos… oy! Um, there’s a blech, the pot stayed in your hand, you intended to return it, it’s still hot… is that five yet???

I knew most, if not all, of this stuff at one time… but my brain has gone fuzzy. I guess, to put it charitably, with set patterns of observance, you don’t have to memorize every single halacha that could possibly apply. And yes, I am at a spiritual low point. So perhaps this learning will also do me some good.

For brushing up on these or any other Jewish topics, I highly recommend this amazingly comprehensive, volunteer-written site (created and maintained by one person!) as a starting point: