בְּנֵי יִשְׂרָאֵל are still slaves in מִצְרַיִם, but things are starting to turn around!

ה׳ has already sent seven מַכּוֹת, plagues, to prove that he’s going to rescue them. 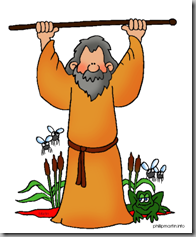 After the last few מכות,פַּרְעֹה  said… (בני ישראל could go).

But when each מַכָּה ended, his heart was… (hardened) and he… (changed his mind).

By now, after seven מכות, אֶרֶץ מִצְרַיִם was… (a great, big mess!).

Many people and animals were… (dead), many buildings and fields… (destroyed, ruined).

Even פרעה’s advisors told him to let בני ישראל go free!  He just would not listen!

Who did Moshe tell פרעה he was taking with him?  (old and young, sons and daughters, and all their animals)

But פרעה only gave in a little; he told מֹשֶׁה that… (only the men could go out).

So ה׳ sent the eighth מכה… (אַרְבֶּה, locusts).  Locusts covered… (the land and made the sky dark)

The locusts ate… (everything in the fields that was left over from מכת בָּרָד!)

פרעה begged משה to daven to stop the ארבה.  He promised to let בני ישראל go.

Did פרעה keep his promise when the ארבה finally stopped?  (no, he did not!)

This is totally different from…  (ה׳, who always keeps promises; everything He says will come true!)

So ה׳ sent the ninth מכה… (חֹשֶׁךְ, darkness).  The whole land was… (cast into darkness!)

Was it a regular darkness, like at night?  (no, the מצריים couldn’t even move around)

During מכת חשך, the homes of בני ישראל still had light!

בני ישראל had seen ה׳’s power.  They knew… (they were leaving מִצְרַיִם soon!)

Some people say during מכת חשך, בני ישראל… (took payment for their slavery in silver and gold from the מצרי homes)

But some of בני ישראל still didn’t believe… (that ה׳ would take them out; they thought מִצְרַיִם was better)

Some of them were trapped in the חשך, too; they couldn’t see… (that ה׳ is like a light, guiding us out if we let him)

פרעה once again changed his mind and told משה never to ask again!

For this special מכה, בני ישראל would have to… (get ready first, and be prepared to leave right away)

He said every family should… (take a lamb:  a young sheep or goat)

They would put its blood on their door to show… (which were the houses of בני ישראל!)

This was a little like a מְזוּזָה /mezuzah, which shows us which ones are Jewish houses!

בני ישראל should eat the lamb with… (מַצָּה and מָרוֹר) just like we still do at the… (סֵדֶר/Seder!)

ה׳ told us we would have פֶּסַח/Pesach every year… (so we’d never forget how he took us out of מִצְרַיִם!)

What time did ה׳ go around to the houses in מִצְרַיִם?  (…it happened at midnight! וַיְהִי בַּחֲצִי הַלַּיְלָה)

The word פסח means ה׳… (skipped over the houses of בני ישראל!)

Since then, ה׳ said every Jewish בכור should have a… (פדיון הבן/Pidyon HaBen) to show our gratitude.

We shouldn’t feel happy the מצריים died…but we were happy to be free at last, after over 200 years!

Think you’ve seen the last of פרעה?  Well, we’ll meet up with him again in next week’s parsha!