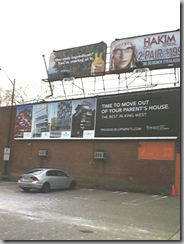 As seen at Eglinton and Glen Cedar, on the way to shul… this keeps popping up, ie I keep forgetting it until I pass by and it bugs me anew.  Today, I was lucky enough to have my camera phone (and, yes, it was worth it to pay the data charges to email the picture to myself, so don’t even ask). 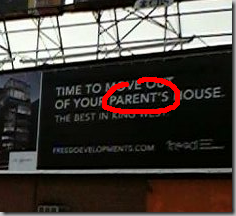 What’s the problem?  Well, if you have to ask… seriously, my problem is – where’s your other parent???  Are they assuming one parent died?  That’s a risky assumption, because sometimes none, or both, are gone.  Or maybe they’re divorced, and only one has enough room for you?  How sad.  Maybe you just don’t get along with the other parent, but again – how sad.

My guess is that whoever wrote this billboard is just plain grammar-dumb, and had no idea the “dangling apostrophe” could ever be correct:  your parents’ house.  It does look kind of naked and alone, hanging off the word like that, but if you are a condo person, I assure you – it is nevertheless correct.

Of course, what’s sad is that I had lots of time to ponder this billboard because my lungs quit working halfway to this person’s house that I was supposed to be tutoring… so I had to sit on a bench across from it and concentrate on just breathing for about five minutes.

But my rational brain says, “this happens every winter – it’s the cold air, why don’t you try what the doctor said last time?”

So when I got home, I called the drugstore and ordered a refill of the super-expensive ($120) “healing” inhaler (Advair Diskus, a topical corticosteroid) so I don’t just have to rely on the super-cheap ($20) “rescue” inhaler (generic salbutamol, a bronchodilator).

Currently, after about 20 puffs of the salbutamol, I’m breathing easy - easier.  And boy, is my heart racing!  Fingers twitching!  Jumpier than caffeine alone, but I’m having iced coffee because I’ve heard it’s good for asthma!

But secretly, I still think I’m going to die, so if I suddenly stop posting, well, only you know what happened.