What happened, two years ago 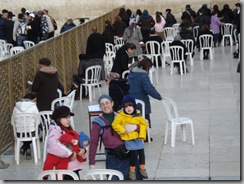 In Chaim Potok’s My Name is Asher Lev, the artist (Asher Lev) searches for a metaphor with which to depict his mother’s pain, waiting at the window for his father to return.  The metaphor he ends up with is a controversial one:  a crucifixion.

My metaphor here is the Stations of the Cross.  Each stop distinct and recognizable along the descent into sorrow.  Does Judaism even have anything paralleling this metaphor?

Everything, this week, is about Two Years Ago.

Two years ago, today or tonight or tomorrow night, because – due to travel time mix-ups and vagaries of the Jewish date – there’s probably no good way of knowing.  Does it matter?  No, except I really want to know.

Sunday evening, supper at my parents’ house:  15 Teves, until sunset.  Sent the kids in to say goodbye to Zeidy.  He had a lot of instructions, money to send to his uncle in Bnei Brak; he was writing everything down, very shakily, on the back of a tattered paper.

Only a little of it made sense; my mother kept arguing with him and finally I took her aside and told her to just say yes – she didn’t have to do every single thing he was asking.  (The week before, he had wished Elisheva a “happy bat mitzvah,” pronouncing BAT as in Batman.)  Not at his best, but I said goodbye and left him a sign for beside his bed that he was the best father I could possibly have had.  Realized after I printed it out that I’d written it in the past tense.

Landed in Yerushalayim on Monday, January 12th, around 9 pm:  17 Teves.

Walked around, got our bearings, ate out and bought essential groceries:  still 17 Teves. 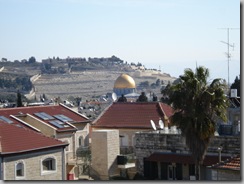 Hung out on Tuesday, got our bearings, visited my old friend Yehuda:  still 17 Teves, until sunset.

Woke up one year older, to another glorious day in the holy city.  Big kids teasing me about my spiritual high.  I could never live in Yerushalayim.   Partly, I swear too much.  :-)

Bus to bnei Brak and back with the big kids (despite bus officials’ attempts to bar me from all Israeli buses due to my bad Hebrew, or at least, their successful attempts to make me feel very, very lost and ashamed).  Found and visited my father’s elderly uncle:  still 18 Teves.

Lost at dusk at a mall (?) in Yerushalayim.  Bus drivers swearing not only our street but our neighbourhood – nay, the entire City Hall across the street – didn’t exist and no buses went there.  Found a bus going there:  probably 19 Teves by then. 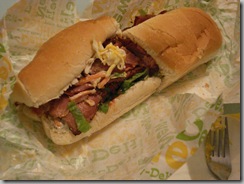 Ate in the apartment in an attempt to have a normal evening.  Ted had bought a dairy chocolate mousse cake from Angel Bakery, but I wanted meat, dammit.  “Is it okay if I have the cake tomorrow?”

10 pm, before bedtime, I cut Naomi Rivka’s hair in the bathtub:  definitely 19 Teves.

Call El Al.  They can’t tell me anything, but I get sucked into the mournful sound of their jingle:  “hachi babayit baolam…”.  The next and only flight to Toronto before Shabbos is at 1 a.m. – in Tel Aviv.

Call my friend, Esther, in Har Nof.  She doesn’t have a car, but if I call a cab, she’ll meet me at the gate of the city. 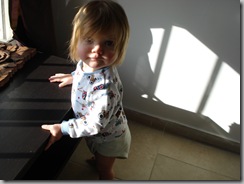 Elisheva says I told her, “go to the kosel – daven for Zeidy’s neshama,” in a very dramatic way.  Yet another opportunity to tease her crazy baalas teshuvah Mommy, perhaps, but what else is a 13-year-old girl good for under these circumstances?

At the airport, Esther – with her newborn baby, who I am seeing for the first time – explains in Hebrew to everybody she sees what is happening, and mercifully, they let me on board with no death certificate, no nothing.  Nobody would voluntarily board a plane in the middle of the night with no stuff and a crabby baby.

Some of the longest days I have ever lived through.

Now, I sit and wonder what the “take-home” is – as I tell the kids when they’re saying divrei Torah.

In the photo at the top, at the kosel, I look happy.  More importantly, I look healthy.  I felt good.  Two years later, I feel – and today, I’m not kidding – very much closer to death.

Over the threshold of 40, it’s true, but that’s not what’s doing it.  I am too big and too inert and too tired to survive much longer without changing things.  And the thing is, I don’t know if I will.  I don’t know if I can.

I loved being thinner, healthier, more active.  I loved my body after my belly-button surgery.  (loved the sudden end to years of excruciating pain)

And once again this winter, I can’t breathe at all.  Worse than last year.  Worse than ever.  I bought an inhaler yesterday, even though deep down I feel like I don’t deserve it – because my health is all my fault, of course (see the other post and my sisters comments for more about that).

I’m okay for a while with the inhaler… but I just feel, well, this time I’ll use the word:  crippled by it.  Trapped inside and beneath this body of mine.

The jean skirt in the picture above, which I bought for the trip to Israel, not only doesn’t fit me anymore, it barely fits in the same room as me.

I’m trapped in this terrible body.  I need some way to get rid of it, to start over, to get back to that person I was, two years ago.  Yeah, okay, some easy way.  And all I can see is the hard way:  the eating-less and moving-around-more way.  As opposed to the killing-myself-slowly way.

I’m not big on “what he would have wanted,” but I’m pretty sure that my father, who guarded his health more devotedly than almost anything (because it was taken away from him and he worked for years to get it back), wouldn’t want to see me falling apart like this.

The point of the Stations of the Cross, to come back to my cruelly-neglected metaphor, is not just wallowing, but internalizing the suffering and make it meaningful; to bring it into your life in a constructive way so you come out spiritually recharged.  To find the “take-home.”

But I’m too scared.  And, even after two years, too sad.  I really don’t know if I’ll make it.  What an unsatisfying end – or perhaps, beginning.