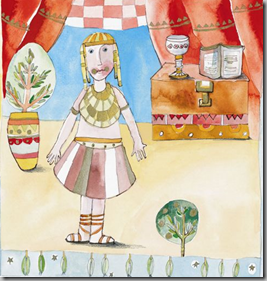 Please see the Vayeishev overview for how we use them in our homeschool!  There are also have several copywork sheets to go with the weekly parsha.

Last week, יוסף tried to have his brother בנימין thrown into jail!

Who stuck up for בנימין?  (יהודה; he had promised their father יעקב he’d protect בנימין)

Instead of בנימין, יהודה offered to stay… (in jail!)

יוסף sent everybody out of the room except his brothers.

What did יוסף tell the brothers first?  (“I am your brother, יוסף.”)

What did יוסף ask the brothers right away?  (“Is my father still alive?”)

But יוסף already knew that יעקב was still alive!  (he said it to remind them of their עברה)

How did the brothers feel when they knew the ruler was יוסף?  (boy, were they scared!)

The brothers thought that יוסף was now going to get back at them!

But יוסף was not angry at his brothers…

o   Because he saw from the test that they… (had done תשובה!)

o   And he knew that he was really sent to מצרים… (by ה׳, to save food for בני ישראל)

How did יוסף show right away that he wasn’t mad?  (by hugging and kissing his brothers)

The brothers went back to ארץ כנען to bring back יעקב

First, they had to tell יעקב that יוסף… (was still alive; what a surprise!)

Why were they afraid to tell יעקב?  (he might die from the shock and surprise)

How did יעקב feel when he found out that יוסף was still alive?  (happy and grateful to ה׳)

But יעקב didn’t rush down to מצרים right away!

What do we learn from this?  (before we make big decisions, we should ask ה or rabbis)

Did ה׳ tell יעקב it was okay to go to מצרים?  (yes, he could go)

ה' promised יעקב that one day, He would bring בני ישראל back from מצרים.

Who went with יעקב down to מצרים?  (his whole family!)

How many people were in יעקב’s family?  (70 people)

The last person of all the seventy was… (יוכבד, who would be משה’s mother when she grew up)

Why?  (ה׳ knew מצרים would be hard for בני ישראל, but He would send משה to lead us out)

When בני ישראל came to מצרים, they didn’t live with the rest of the מצריים!

Why couldn’t they live together?

בני ישראל did very well in גושן, but many מצריים didn’t have enough food!

When they ran out of food, they… (gave יוסף their money to buy more food)

When they ran out of money, they… (sold their animals to יוסף to buy more food)

When they ran out of animals, they… (sold their farmland to יוסף to buy more food)

What did יוסף do with the money, animals and farmland?  (he gave it all to פרעה)

At first, the people were grateful to יוסף for giving them food.

פרעה was grateful to יוסף for saving the people and land of מצרים.

But people do not always remember being grateful…

as we will find out in a couple of weeks…!