Please see the Vayeishev overview for how we use them in our homeschool!  There are also copywork sheets to go with the weekly parsha, as well as a sequencing summary for the the entire book of Bereishit/ Bereishis/ Genesis. (whatever you want to call it!)… enjoy!

יעקב and all the בני ישראל were still in מצרים.

He did not want to be buried in (מצרים)

יעקב made יוסף promise to bring his body back to ארץ כנען. 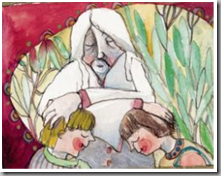 יוסף brought his sons to יעקב for a ברכה.

But יעקב mixed up his hands when he bentsched them!  Did he do it by mistake? (no, he did not!)

He put his right hand on (אפרים’s head), and his left hand on (מנשה’s head).

He did that because אפרים was… (more humble, and learned תורה)

יעקב bentsched אפרים and מנשה with words we still say at night when we say שמע:

(read more about this tefillah here)

יעקב also wanted to bentsch his own sons before he died.

Three of the sons had behaved badly – they did not get a full ברכה.  (ראובן, שמעון and לוי)

ראובן, like water, you rush too much into things – you should have been a better leader.

שמעון and לוי, you saved דינה, but were cruel to שכם – that’s not how a צדיק acts. 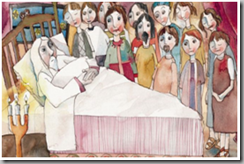 The rest of the sons each got his own special ברכה!

יהודה, like a (lion), will be the leader, the king of all the שבטים.

Two שבטים will go together:

זבולון will have (sailing ships) and wealth to support…

דן, like a (snake), will be a powerful fighter against his enemies.

גד will have many soldiers.

נפתלי, fast and graceful like a (gazelle or deer), will speak beautifully.

יוסף, charming and beautiful, is like a vine with many grapes growing.

בנימין, like a (wolf), is a powerful hunter, but never as mighty as יהודה.

Who brought יעקב’s body back to ארץ כנען?  (יוסף and all his brothers)

They buried him in… (מערת המכפלה) which means (the cave of doubles, or pairs of our אבות)

Who else is buried there?  (אדם and חוה, אברהם and שרה, יצחק and רבקה, and לאה)

When he died, he asked his brothers… (to carry his body out of  מצריםwhen they left)

Would they keep their promise?  (yes, they would!)

All of יעקב’s sons died in מצרים.  Their descendents, led by משה, would take יוסף’s body out…

As we will find out in ספר שמות!