As we start this week’s parsha, בְּנֵי יִשְׂרָאֵל are in big trouble:

To punish מֹשֶׁה, the newפַּרְעֹה  is making them work harder than ever before! 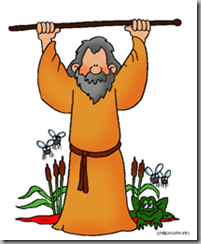 asked ה׳ at the end of last week’s parsha why he wasn’t helping בני ישראל.

ה׳ reminds משה of the promises he made to… (אברהם, יצחק and יעקב)

ה׳ uses four special words to explain how much he loves בני ישראל:

We remember these four words at the סֵדֶר (Seder) with… (four cups of wine or grape juice!)

ה׳ also makes a fifth promise:  וְהֵבֵאתִי  - I will bring you to אֶרֶץ כְּנַעַן !

סֵפֶר שְׁמוֹת is all about ה׳ keeping promises; all these things will come true!

Was life good for בני ישראל?  (no, they were miserable)

Did they believe משה when he told them what ה׳ would do?  (no, they were working too hard!)

אהרן and משה tried proving they really were sent from ה׳!

אהרן threw down his stick and it… (turned into aנָחָשׁ , a snake – wow!)

Was פרעה impressed?  (no, his magicians could turn their sticks into snakes, too!)

What happened to the other magicians’ snakes?  (אהרן’s snake ate them all up!)

פרעה’s heart was “hardened”; ה׳ knew he wouldn’t listen, no matter what.

ה׳ needed to send ten punishments – we call them מַכּוֹת (in English, plagues)!

All the water in מצרים turned… (into blood)

Did בני ישראל have water still?  (yes, in גושן, the water didn’t change)

Did פרעה believe in משה and אהרן and listen to ה׳ after that?  (no, he did not!)

The second מכה was… (צְפַרְדֵּעַ, frogs).  Frogs were… (everywhere; in their beds, even their ovens!)

Some people say there was only one… (big frog; the מצריים hit it & it turned into many little frogs!)

The third מכה was… (כִּנִּים, lice).  The dust everywhere… (turned into itchy bugs!)

פרעה’s magicians told him this was really from ה׳, but he still… (didn’t listen)

The fourth מכה was… (עָרוֹב, wild animals).  They went… (everywhere, and destroyed the land!)

This time, פרעה said בני ישראל could go.  But when the מכה ended, he changed his mind.

The fifth מכה was… (דֶּבֶר, cattle disease).  All the animals of the מצריים… (got sick and died)

Did בני ישראל have sick animals?  (no, all their animals stayed healthy)

The sixth מכה was… (שְׁחִין, boils).  All of the מצריים… (got terrible, painful bumps on their bodies)

The seventh מכה was… (בָּרָד, hail).  Fire and ice… (rained down and destroyed the מצרי fields)

Even after all of that, פרעה’s heart was hardened; he wouldn’t listen to משה and אהרן!

Why didn’t ה׳ kill the מצריים?

We will learn about three more מכות in next week’s parsha!