Textured Sensory Alphabet a la Montessori (not quite) 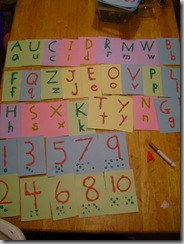 Continuing this evening’s theme of cheap homemade homeschool manipulatives, I bought a pack of light cardstock at Dollarama tonight and decided to jump right in and make a whole set of textured sensory letters.

The only downside – I realized as I was gluing these – is that, because the beads are pasta, they are chometz.  They are actual tiny pasta, coloured with food colouring (I made them for a map project we did back in June, but you need so few to cover anything that they’ve lasted forever).  Nothing that could render them inedible, except maybe trace quantities of glue.

I used to have this problem with macaroni crafts the kids would bring home from school.  I asked a shailah.  It IS a problem.  One year, the daycare actually sent home macaroni art just a few days before Pesach.  I did mention that one to the director (it’s a Jewish daycare; they should have known better…).

I did a full alphabet set and a numbers set – odd numbers blue, even numbers green.  I wanted to put “dice dot” numbers on each card as well, but by this point, my glue was totally acting up and they turned out kind of lousy… 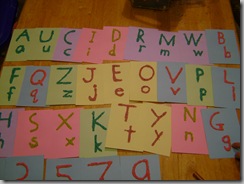 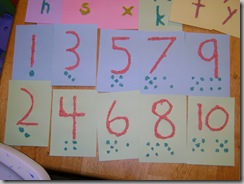 I also found this helpful diagram and a lesson plan to go with it.  For righties, you just tell the kid the numbers go the same way as their writing hand (except 6).  For lefties, tell them it’s the non-writing hand.  I think these handshapes will help Naomi Rivka a lot! 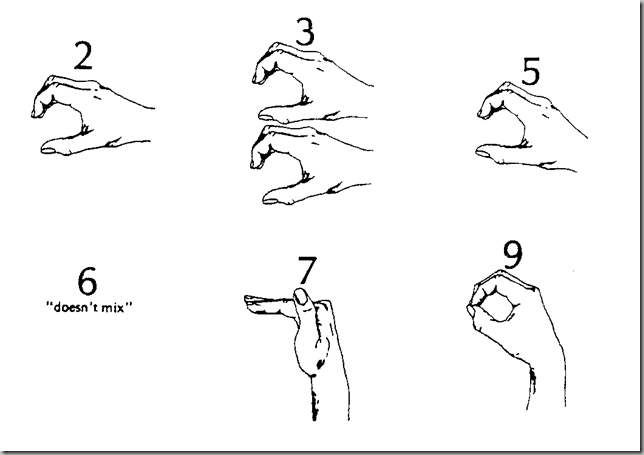 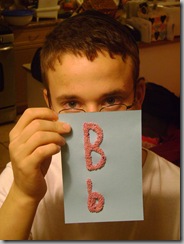