This week’s parsha poem is dedicated in memory of my father, Yechiel Pinchas ben Chaim Zev and Chana Rivka, niftar 18 Teves, 5769 – two years ago this Shabbos.  It happens to contain one of his favourite Yiddish expressions.  (This was also – 29 years ago – my bat mitzvah parsha:  yes, I lained!) 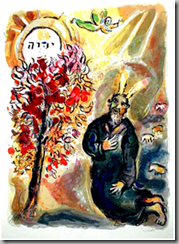 And bundle it, tie it up, bunch it up good

Now set it aside and toss in a spark

You’ll find that your room is a lot less, well, dark.

And after a while, if there’s air enough,

Then all you’ll have left is some ashes and stuff.

There’s nothing left over of the wood that you burned.

(And a chemistry lesson we hope you have learned!)

But what if the fire’s a message of sorts,

Drawing you into Hashem’s holy courts?

Well, in that case, it might not be such a surprise

That one bush was not burned up to dust in the skies. 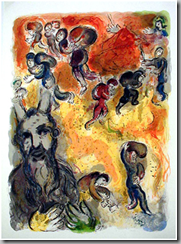 Moshe’s sheep led the way to a sight kind of scary;

He knew right away it was not ordinary.

“Put off your shoes first,” a malach intoned.

(If it was today, Hashem might have just phoned.)

Of leading the Jews out of Paroh’s stronghold;

For something like that he would have to be bold.

But he saw, perhaps, how Hashem loved the Jews

(or maybe he just hoped to get back in his shoes),

For the bush Hashem burnt was to him a great sign

That the ending would always turn out to be fine.

Tough times lay ahead for the whole Jewish nation,

Shlepping through deserts, through Europe and Greece,

Searching for homes we could live in with peace. 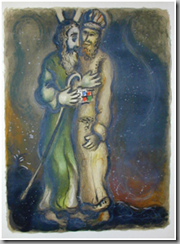 But that fire that burns is Hashem’s holy light,

Guiding our hearts through the long, cold, dark night.

We burn and we burn, fill the world with His fire,

With Torah, with light, with words to inspire.

Tzu Zayn – to live, though we’re scattered and scarred,

A Yid – as a Jew, filled with ancient desire,

(This week’s illustrations are by Marc Chagall, from Leon Amiel’s 1966 The Story of the Exodus.  More information:  http://www.spaightwoodgalleries.com/Pages/Chagall_Exodus.html)