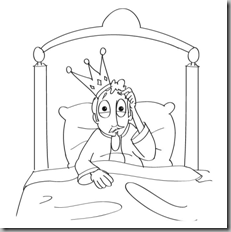 Such a weird dream, Paroh:  what do you make of that?

They came up from the Nile, hungry, dripping wet,

Oh my gosh, King Paroh – did you figure it all out yet?

Did you ever hear of voracious wheat, eating other grain?

Pinch me now to wake up ‘cuz it’s hurting in my brain!

Said one, “It means a curse was sent to you.”

“No,” said another, “your family will grow rich!”

Old Paroh was afraid to go near his bedroom door,

He didn’t want those dreams to come find him anymore.

He stayed up shivering and scratching at his head

Instead of lying down, softly snoozing on his bed.

“Get out!” he shrieked at those bumbling magic men

“All of your prediction isn’t worth a shrivelled hen!”

“Just bring me a goblet with some nice and mellow wine,

And perhaps all my problems will turn out to be just fine.”

“Here’s your wine,” said the butler to a very tired king.

“Are you sure there’s nothing else that you’d like for me to bring?”

But an answer for these dreams – that is all that I can plead.”

To figure out dreams and say just what they mean;

A Hebrew man, quite nice he was, though slightly wont to preen.”

“Summon him!” Paroh shouted.  “Be sure that he will come!

To help me figure out these dreams that seem so scary and dumb.”

So they brought Yosef, Yaakov’s fair son, out from his prison cell

And sure enough, he understood and soon began to foretell.

Then seven years with not enough, wishing that they had more.

Yosef said what the dreams meant; now Paroh knew it, too.

“It all makes sense,” he shouted aloud, “I know just what to do!”

Paroh thought of those bad years, the troubles up ahead,

For folks to eat so they could work in Paroh’s busy land,

So he reached and pulled his ring off, right from his royal hand.

“You are wise,” he intoned, “so you’ll lead us all through –

You’ll do a great job, with those wise things you do.”

Now anyone but Yosef would have puffed up there so proud,

But Yosef only spoke his thoughts, confessed the truth aloud.

“I see the truth, perhaps, but it’s Hashem who guides me there –

I listen to Him and that is when I’m ever truly aware.”

From Paroh’s wise men could be heard a very distant rumble;

They couldn’t believe that anyone could be gosh-darned humble.

But Yosef only took the ring, on his finger he slipped it tight: