Parenting in the Modern (Saved by the Internet) Age

Wow – two incidents in the last three days have convinced me that I have no idea how parents of teenagers coped before the Internet. 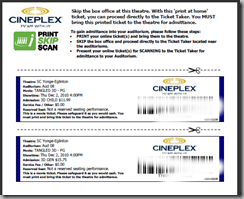 Big girl and little girl going to movie together.  “How much is it for the movie?”  “$20.”  Hand over $20, plus 4 loonies that little girl still had sitting around from her fourth birthday (she’s 5.5 now!).  Girls skip off to the subway station to go to the movie.

Teary phone call about an hour later.  “I don’t have enough for the movie!”  Eventually, I buy a ticket online and tell her to pick it up at the kiosk.  The kiosk doesn’t recognize the code, she calls back a few times, teary, but finally, it works (they were “O”s, not “0”’s in the code, which is what I said in the first place!).  Girls see movie, skip home happily two hours later.

Saved by the Internet! 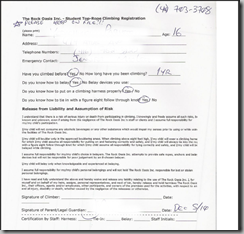 Big boy going rock climbing.  Big boy skips off to the subway station to go rock climbing with his aunties.  We are both hoping that one or both of them will pick up all or part of his tab because he’s down to almost nothing in his bank account thanks to LAST week’s rock climbing.  I certainly don’t worry about money because at the very least, they can lend it to him.

Phone call an hour later.  Not teary, because at 16, he is a Manly Boy.  But definitely insistent:  he is under 18 and the place needs a waiver.  Apparently, the waiver I signed for him on Wednesday was a one-time thing; they have torn it up and need a new one for today.  But I must visit the website, print the waiver and FAX to the climbing place.  No; email won’t work.  “They don’t have an email thing.”  (huh?)

Think briefly of printing the waiver, scanning it, and emailing it to my SISTER, who can get it on her iPad and print it out somehow (bluetooth?).

Finally – okay, seconds later, but in the Internet age, it’s an eternity – I googled “free fax” and sure enough, there are many sites that will attach an ad page to your fax and send it for free within North America.  I just hope the ad wasn’t anything too porny.  (in case you’re curious, it was this site, but there are many others)

Two minutes later, I had a confirmation in my inbox telling me my fax was successfully sent.  I haven’t heard back from the boy, but I’m assuming that no news means the good news of his waiver being received and him climbing to his heart’s (and my sisters’ budgets’) content.  (I hope you noticed the lovely well-placed apostrophes in the previous sentence!)

And again… saved by the Internet!

Here’s the thing:  I know how parents, or more specifically, teens, coped before the Internet.   They were disappointed.  They learned lessons.

Probably not just occasionally, but often.  If you arrive at the rock-climbing place with no waiver, you can’t climb.  If you get to the movie and can’t afford a ticket, you can’t see the movie.  You do something else or head back home.  isappointed, yes, but perhaps you’ve learned something (the hard way) that will pay off by being better organized next time.

Nevertheless, I don’t think either of these two things were “above and beyond” type things.  I really don’t think I am that parent, going way out of my way to help a kid do something he or she could and should have done for himself or herself.

These two incidents, at least, ended up being basically no big deal at my end, despite a bunch of sighing and eye-rolling and heart-pounding because the phone calls never come at a time when I’m sitting kicking up my heels (maybe cuz I never do that) and because I hate phone calls in general.

Still:  a couple of clicks.  Entering a PIN to use my debit card.  Or a signature and quickly scanning into a PDF document (we use Scan2PDF which is Germanic and weird but FREE and it works well & fast!).

And everybody is happy in the Age of the Internet.