Last Sunday night (not yesterday, but last week), my mother was working at her volunteer job all day, so I “volunteered” to make supper.

I have an amazing beer batter recipe that we all love, so I made corn fritters with it, and we had them along with some healthy and delicious pumpkin/black-bean soup.  It was a great meal – and an inexpensive way to feed my mother plus sister and our whole family, without forcing me to cook all day on a Sunday.

My mother hated the corn fritters.  “These aren’t my mother’s corn fritters,” she said.  No, they’re not.  My mother’s are the same; I grew up with them.  They are delicious, and made with milk (my mother uses soy milk to make them pareve).  No beer, so less savoury, more sweet.  They taste VERY different.  I never claimed mine were the same.

Finally, after nibbling at one for a while, she announced “I’m pretending I’m eating waffles.”

Flattering, right?  That’s how we all show our compliments to the chef:  “I’m pretending I’m eating… something better than what you just cooked.”

Then, on Shabbos, my mother asked (Again!  I already said yes!) if I was making latkes for Sunday night (yesterday).

I have made latkes for the family every year for… well, since my first marriage.  Almost twenty years, except maybe the year I wasn’t living in Toronto.  Since I started wanting kosher latkes, I guess; at first, those would not have been available in my mother’s home (they are now – yay!).

I said yes, of course.  And jokingly added that I would make more of the pumpkin latkes we had on Thursday night.  Which were actually quite nice; it was really just a mix of frozen pumpkin with latke-mix.  Easy and quick and vegan and delicious.  But I wouldn’t serve them to a crowd, or at a party.  I would serve regular latkes. 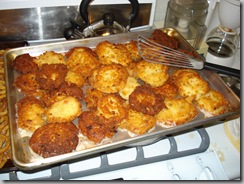 I thought it was pretty clear I was joking.

Let me say again:  I have brought delicious latkes to her party every single year with the exception of two years ago when things were NOT going my way (Part 2 of the rant) and my father was dying, and I made the latkes from a mix (see picture, right, of the terrible latkes) and they were terrible and he kept choking on them and I thought he would die from choking on the terrible latkes I made from a mix so it wasn’t even my fault.  That stuff is important – bear with me.

Not just delicious latkes.  Frankly, I make amazing latkes.  Sweet and savoury – real grated potato (none of that mushy purée stuff ) but just enough carrot for colour and sweetness; just enough onion to give them depth.

And again, almost twenty years, if not more.

So yesterday, at my mother’s party, I went to see about putting out the latkes I slaved over all yesterday afternoon when I noticed – people were already helping themselves to latkes.

“What are those?” I asked my mother – not very nicely, I guess.  Is there a  nice way to point a finger at a plate of the WRONG latkes???

“I wanted to be sure there would be latkes.”

There were no words for how furious I was – how futile, how foolish my entire afternoon of latke-making suddenly felt.  How unappreciated I felt.

Her “latkes” were weird and square.  Apparently, it was kugel, cut up, fried?  I don’t know – I didn’t get a close enough look.  My latkes, meanwhile, were languishing in the oven, crisp and hot and apparently homeless, evicted by these geometric impostors.

(I have to add here – my mother makes REALLY GOOD latkes.  Probably better than mine.  Whose are better is absolutely NOT the point.  In case anyone who is reading this was there and tried one or both.  You don’t have to take sides!)

Anyway, there were no words.

So I left… I went downstairs and had a little cry in the astonishingly comfortable newly-refurbished guest bedroom (she’s been fixing it up for months now and there’s a lovely brand-new daybed just waiting to cry on).

Eventually, my mother came downstairs and found me, and apologized, and I said over and over everything that I have already said here. 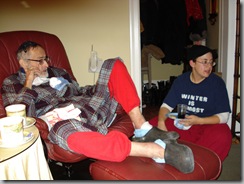 “The only time I did not make excellent latkes,” I said, “was two years ago when Daddy was dying and I didn’t want a party anyway and everything was terrible.”

“You’re right – everything was terrible.”

(photo, left:  The Year Everything was Terrible.  And my father, with the last latke he ever ate – and it was a lousy one, though it didn’t kill him.  I have no idea what that is on  my head, and I remember dressing for the party by throwing on my holey house t-shirt – saying “Winter is Almost Over” – on top of a turtleneck.)

I often forget how wonderful my mother is in a crisis.

After a couple of minutes of everybody crying, we were ready to go upstairs and face the latkes.  She’d already taken away the  impostors – I can be such a baby sometimes, but being my mother, she responds so motherishly – and we were away to the races… my delicious latkes basking in their place in the sun, like nothing had ever happened.