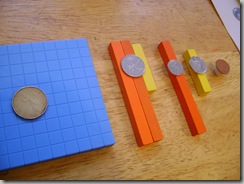 We are working our way through a mini-unit on MONEY – just in time for Chanukah!  We have done pennies, nickels and dimes, so today’s coin was QUARTERS.

To explain what the word quarter means (we haven’t started fractions yet), I folded a piece of paper in half and explained HALF first.  Then I did the same thing with another paper, folded it twice to make QUARTERS.  I showed that there were four parts, and each quarter was one part. 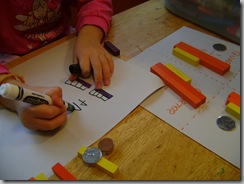 Naomi Rivka actually grasped it right away and excitedly decided she wanted to teach ME something.  She traced a purple (4) rod, then drew four unit (1) cubes lined up next to it – the quarters that make up one purple.  She used  her diagram to prove that four plus four equals EIGHT.

Later, she also proved that ten plus ten equals twenty and demonstrated with a drawing of two traced orange rods.  These problems are written in her own notation. 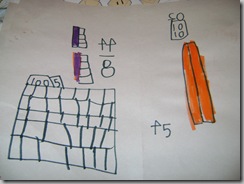 On with the money math…

Here is how I have been using our Cuisenaire Rods to introduce money concepts (whoops; I moved the photo up to the top, so you’ll have to scroll up to see it!).  Sometimes, we put the rods over the money, sometimes, we perch the money on the rods.

Either way, the “cents” value is concretely associated with a rod – and Naomi is beginning to equate rod length with actual numerals.  However, as you can see, quarters are not as simple as any other coin. 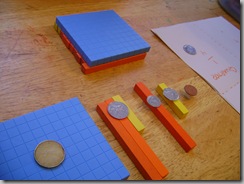 Today, I also introduced the blue “hundreds” flats for the first time.  Without prompting, when I showed her the tiny “squares” printed on the flat, Naomi Rivka jumped in and counted them – all the way to 100!

Then, we skip-counted orange rods, counting by tens:  10, 20, 30… up to 100.  Finally, I showed her how the blue flat covered the ten orange rods perfectly.  100!  I introduced loonies (dollar coins) today because it fit in well with talking about hundreds and dollars.

Quarters are probably the hardest coin we will deal with, so I didn’t want to spend too much time on them.  We did two activities:

First, I had her place a quarter, along with “25 cents” worth of rods (two orange and a yellow; she wanted to use another combination of rods, but I said we were going to use mostly orange and she was okay with that) on each quarter of the paper I’d divided up at the beginning.  This reinforces the numeral value, along with the concept that quarters always come in FOURS. 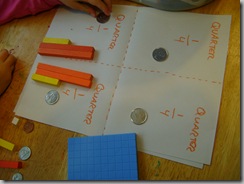 Once each quadrant had its rods, we took off the rods and grouped them – Naomi wanted to line them up, but the table was too cluttered and there wouldn’t have been room, though it would have been a fine thing if we’d had a metre stick to see  them adding to 100! – and bunched them up together to fit into a square.

I showed her that all the rods on the  page – four quarters’ worth – added up to one blue “hundreds” flat.  I explained that the four quarters have the same value as one loonie.

Then, we counted quarters by fours.  This was good skip-counting practice.  She made a couple of mistakes – 4, 8, 14, 18 – but only needed correcting once to get a few more right.

I then gave her a few piles of quarters to count.  I made sure each pile had a multiple of four quarters.  For every four quarters, I “sold” her a blue flat.  She immensely liked pretending she was buying them.  Once she was finished trading quarters for flats, she counted the flats so we knew how much money (in dollars) she had altogether.

All in all, I am very happy with how this lesson went.  Absolutely no writing – other than what Naomi Rivka wanted to do with tracing the rods and writing equations – but a ton of learning going on.

She was excited to come back to it afterwards for some quiet time with the rods while I was putting Gavriel Zev down for his nap.