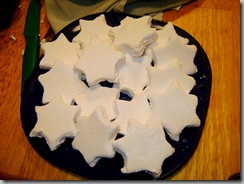 Thing #2 on my list of What To Do Now That I Have Kosher Gelatin was making marshmallows.

I have been reading about Shoshana’s over at Couldn’t be Pareve for a while now and she makes it sound both easy and richly rewarding.

Without a candy thermometer, it isn’t easy, exactly, but after a lot of googling, I think I got the hang of it, and it sure is bizarre – in a fun kind of way – to be sitting snacking (as I type this) on marshmallows I have made myself.

I used this Pesach recipe, only with corn starch instead of potato starch.  These are very plain marshmallows, with just a hint of real vanilla.

On the Scale of Potchkedik, I’d say – especially without a candy thermometer, so I was dropping blobs of molten sugar into ice water every 30 seconds – the process was about an 11 out of 10.  Definitely one I’d save for a day with absolutely NOTHING else going on.

Luckily, today we had almost nothing else going on, so I was able to give this 120% of my brainpower.  Downside is it’s 8:00 pm and I’m still in my jammies.  Okay, that’s not entirely the fault of the marshmallows.

These use a TON of gelatin – 3 tbsp, which when I was measuring, came to more than three packets.  The good news, however, is that my newish pareve Dutch Oven – which I still haven’t baked in, because I suspect it’s just too small – is just the perfect size and weight for boiling sugar.  It is so heavy – I just feel confident, like nothing can go wrong.

I have to thank Shoshana a hundred times over for the admonition not to stir the sugar syrup – something I have only become aware of lately.  Whenever I tried to make candy before, I stood at the pot obsessively stirring and naturally, nothing ever happened.  Today, I just covered the pot for 2 minutes like she suggests, and never had a moment’s difficulty.

Shoshana usually slices the marshmallows, but I was particularly inspired by a picture on her site of Chanukah marshmallows, and even some Xmas ones, coated in coloured sugar and lined up in a box for gift-giving.

Hers are definitely beautiful, and would make an awesome gift, however, my question seemed to be what to do with the “outtakes”?  I used my star cutter as efficiently as possible, but still ended up with a ton of weird un-beautiful shapes in between and around the edges.  I think my marshmallows turned out a bit softer than  hers – hers always look almost crisp in the pictures, like meringues.  But they mostly cut fine – the narrow tips of the star were a bit tricky and I did have to occasionally clean the cutter out and re-spray with oil.

Here are all the leftover bits, shaken free of their corn starch and sugar, tossing about in my cheap plastic sieve. If I make these again – which I suspect is contingent on the purchase or gifting of a candy thermometer – I would probably not do vanilla again (I don’t love the flavour; maybe mint, or almond? lemon?  I love the idea of choosing my own flavours!), and I would probably simply slice them into squares the way Shoshana usually does.

They certainly do.  The flavour does linger, but I was pleasantly surprised that there doesn’t seem to be any kind of unpleasantness going on from all that gelatin.  I was worried there might be an aftertaste.  They do leave a very sticky sweet sensation, more cloyingly sweet than storebought marshmallows.  That might improve if I  used corn syrup instead of sugar next time (just happened to be out of corn syrup – drat!).

All in all, more of a success than I thought the experiment would be!