Years ago, I read online about a father who gave his kids a math challenge for Chanukah:  what would you rather have, a dollar every single day of Chanukah, or a dime the first day, which would double every single day (ie 10 cents, 20 cents, 40 cents, etc…).

So I tried it with the big kids.

The first year, YM – who was maybe in Grade Three or Four at the time - sat down and actually worked out the math, then chose the “doubling dime” option.  He told Elisheva to do the same.  They’ve chosen the dime every year since. 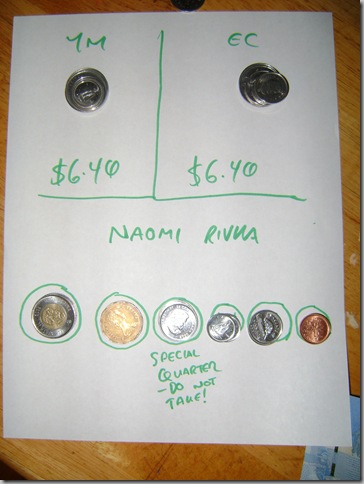 For Naomi, I wrapped up our week-long “money math” unit by letting her keep two of every coin we learned about – a total of $6.82, which is not bad for a 5-year-old who doesn’t desperately need the money to buy pizza or burgers at school.

Kind of bad, actually.  There’s a new burger place in town, two doors north of the venerable King David Pizza that has long served the yeshiva / Bais Yaakov crowd (somehow despite controversies and bans on both genders ever being in the place at the same time, lest they glimpse each other over bourekas and fall madly in love).

Anyway, the burger place is cheaper.  I think it’s $3 for a burger and $4 for a pizza slice at King David.  And YM is now eating hamburgers every single chance he gets.  In fact, for all his griping about my “Vegan Vursday” tradition, he regularly checks our supper menus to see if he can fit in a hamburger for lunch.  Vegan supper means he can binge on meat and not worry about missing a dairy supper.

Why do I say this is “kind of bad”?  No idea, actually.  Why do I think of pizza as “healthier” food than a hamburger?  Less chance of food poisoning, perhaps, but beyond that, a pizza slice (with or without fries) is about as junky a lunch as you can get.

The money was gone when I got up this morning.  Burger lunch for everyone today!