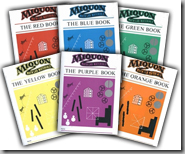 I have been getting more than a bit frustrated “doing” Miquon math, and I had a revelation over Shabbos.  Which I always hate, because I can’t write it down… on the other hand, it forces me to keep whatever it is IN my thoughts so I don’t forget.

So here was the revelation:  I’m working too hard to do it in order.  Of course it’s dull doing so many pages of counting or number lines or whatever – you’re not supposed to do them in order.  That’s Part One.  Part two is:  I’m trying too hard.

Miquon is supposed to be student-directed, whereas we’ve been doing it like our other subjects, where I demonstrate a concept, Naomi explores it for a bit, she works on the worksheet, and DONE.

I reread the First Grade Diary, a guidebook that (kind of) shows how one teacher (the woman who created the program) teaches math with Miquon, and it hit me like a lightbulb.

In the First Grade Diary, the lessons are usually divided into at least two parts, one teacher-directed, playing a game, demonstrating a concept, etc.  And then a second part where kids choose activities and/or pick lab sheets to “experiment” with.

Yup… the KIDS choose the worksheets.  Well, then!  That’s a little different, isn’t it?

So this afternoon, I ransacked both workbooks (I have the first two, Orange and Red, but may get the next two if we continue with this new system), tearing out every single sheet I felt Naomi Rivka was remotely ready for. 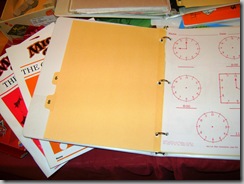 Not just addition, which we have been dutifully slogging through, but measurement, inequalities, geometry, odd-even, because I think it would be fun and easy, and – because she’s really into clocks right now – the first of the “time” worksheets.

So far, I’ve hole-punched all the torn-out worksheets and stuck them in a binder, 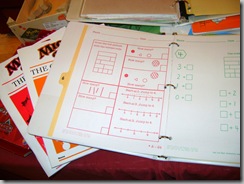 roughly grouped into topics and separated by dividers.  And THAT is what we will use for math this week, and perhaps from now on.

Not the thick workbooks, with all their irrelevant (or rather, not-yet-relevant) pages, but this binder, which has exactly 16 pieces of paper in it so far.  This seems to me a very lovely number:  not overwhelming; perfect for child-directed learning.

It’s almost Montessori in its elegance. 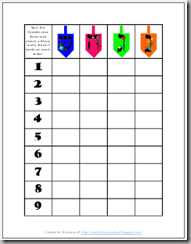 p.s.   Bonus!  This method will also allow me to incorporate occasional worksheets from elsewhere – online printables, selections from her Clock Math book or even this cute Dreidel Graphing exercise from Mommzy over at Jewish Homeschool.  Or cool printables from this site I’ve just discovered!

Not that I’m in favour of MORE worksheets.  No busywork, please!  Just fun with math…