Racism in kids’ classics: what do you do…? 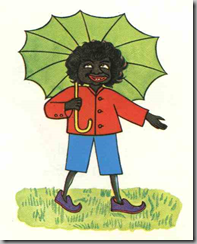 One of my favourite books as a child was Little Black Sambo, by Helen Bannerman.  At left, you can see the cover illustration – this is basically what all the pictures in the book looked like:  grinning dark faces (his and his parents, Black Mumbo and Black Jumbo), interspersed with a few leering tigers.

A friend yesterday was talking about “censoring” a classic kids’ story because of its racist, sexist content (after Reconstruction, black girl was finally permitted to attend school with her brothers!).

She also mentioned a passage from Little House where Pa sings a song that has really racist lyrics.  When I read that to my kids, I simply changed the words – as I told her, there’s a reason we can read and our young kids can’t.

I also thought of the sections from Little House on the Prairie which deal with the Indians who live on the land the Ingalls family is trying to settle – particularly of Laura’s obsession with seeing a “papoose,” and at one point, even begging to HAVE one (ie, own it!).

I did read Little House to my kids, and along the way we had what I think were a few nice, brief conversations about tensions between First Nations and white people over the land.

When I look at some of the book recommendations for Charlotte Mason and other classical-type homeschooling, though, I wonder, especially coming at it from a Jewish point of view when so much of the canon of Great Literature in English is written from a white, Christian, Euro-centric perspective.

So I’m wondering where other parents draw the lines in the sand.  Where do you skip a book entirely?  Where do you censor it?  And where do you choose to read troubling texts “as-is” but supplement the readings with your own explanations and understandings of how the words are written and the attitudes behind them?

I really do want to know.  Any thoughts are welcome!

In terms of Little Black Sambo, I have read two versions to my kids – one by Fred Marcellino called Little Babaji:  exactly the same story, still set in India, with a jolly Indian boy, not a black one (the parents are called Mamaji and Papaji), and another renamed Little Black Sambo, which plops Sambo, a spunky African boy, deep into exotic Indian settings.  The children enjoyed both versions without blinking or really caring about the blackness of Sambo or Babaji one way or another… 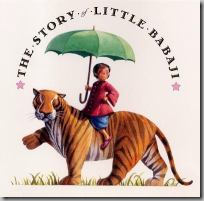 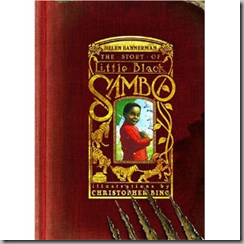