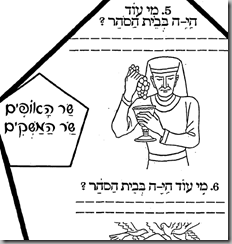 This worksheet for Parshas Vayeishev, downloadable at chinuch.org, asks (both questions are the same), “Who else was in jail?” (ie with Yosef).

But the word “was” (in Hebrew, היה) happens to contain letters that are also present in Hashem’s name, ie the letter Yud and the letter Hey.

So it’s been hyphenated.  הי-ה… lest anybody think that we are actually using Hashem’s name.

This makes about as much sense as hyphenating the word “pagoda.”  (I can just hear someone saying, “Well, it does have ‘God’ in the middle…”)

It’s right up there along with people who say “yud-kay-vav-kay,” or abbreviate the holy word Hashem (literally, “the name,” nothing about God at all, really) as ד׳ (dalet), lest they abuse in some way the sanctity of the holy letter ה׳.

And don’t get me started on people who say “adoshem,” which kind of sounds like teasing:  “Hey, Lord, I’m going to call on You… baruch… atah… ado… SHEM – psych!!!”

It’s like we’ve forgotten that none of these syllables we’re protecting ourselves from are God’s REAL NAME – the big ineffable name that we no longer even attempt to, well, eff.

And even that might, frankly, be not exactly his REAL name… in that it might not contain any part of his infinite essence.  It’s just a linguistic construct that helps us conceive of and address him appropriately.

Seems to me that every new linguistic fence is distance we don’t need between ourselves and Hashem – or however you want to refer to our eternally choosing-and-chosen deity.

Hashem has given us these names (or revealed hints about them), as a way to build intimacy; to help us understand him, close-up.  By rejecting this gift, by scaring our kids about when and where to use the names, we’re building a great big “keep away” construction zone – slashed with hyphens and strewn with out-of-context dalets – that’s just going to drive them farther away.