(In case you’re here from the Charlotte Mason blog carnival, “parsha” refers to this week’s portion in the annual cycle of weekly Torah – Bible – readings followed by all Jews worldwide.  Click here for more parsha-related posts.)

This was only my second time asking for a parsha narration, and I chose a VERY short paragraph out of The Shabbat Book to read to her (I was in a hurry!).  I’m thrilled with the detail of her narration and she was thrilled at the chance to draw a WEDDING. 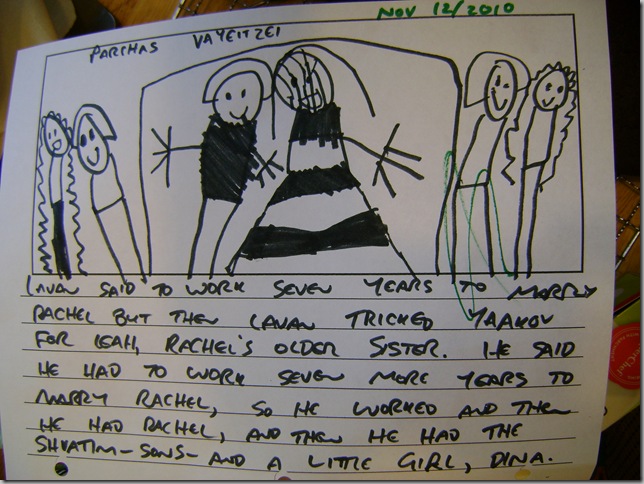 The chronology in the book I chose is not clear, which is why she’s made the same mistake I made for years – Yaakov didn’t actually have to work seven more years BEFORE Lavan let him marry Rachel.  He married her almost right away, and only then had to put in the time.

I do plan to work with Naomi a bit on “beginning, middle and end” when she’s narrating.  I would have liked a little of the preamble to this story, but really, I’m quite thrilled that she isn’t protesting this little task so I think we’ll keep it up with minimal intervention on my part.

She definitely loves the “narration paper” (photocopied from Living Learning Science, but easy to create in Word), and later requested a blank one so she could write a recipe for Elisheva.

Funny how something so simple (piece of white paper with a rectangle and some lines) can be such a trigger for imagination.