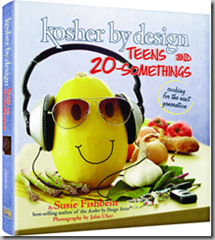 So I bet you’re wondering about the winner of my own Cooking Disaster Contest, with the disaster-y-est disaster, as voted by an exclusive panel of my ten sanest immediate relatives in four excruciating and increasingly confusing rounds of voting (“Wait, I thought ‘fingernails in the blintzes’ was still in the running – it’s NOT still in? Because I want to vote for it!”)… not to mention several rounds of my mother saying, “wait – what about…?” and tossing in a kitchen disaster of her own.

The winner is… my mother!

Ha ha. Just kidding. Though Artscroll did goof and send me a spare copy, which I may give to her, because truly, that turkey-waxing thing is way worse than anything anyone submitted.

Here’s a sample of how the judging process went (read all the entries in the Comments section following this post):

So here’s the winning anecdote, which was also the very first entry! It was submitted by DAVID – no contact info, so please get in touch with me by THIS SUNDAY (November 14) if you want to claim your prize! Jay3fer “at” gmail “dot” com.

A couple days before pesach I was helping out my mother with baking so i making a potato kugel I was done and put it in the oven and my mother askes me why is the Pine-sol on the counter? oops. I by mistake used pine-sol instead of oil that was the end of me baking for that Yom Tov.

In case David doesn’t contact me, the runner-up is SuperRaizy, with this spine-tingling tale:

A few days after my wedding, I was preparing lunch for my husband's younger brother, who was staying with us. I made cheese blintzes from scratch, and I was so proud of myself. As I watched him take a bite, I heard a loud crunching sound, and he spit the food back onto the plate. "what is THIS?" he asked as he pulled a long shiny object out of the cheese filling. Horrified, I looked down at my hands and realized that one of my fake nails had fallen off while I was cooking. Not surprisingly, he told that story for years and I was never able to live it down.

So hold onto your hat, SuperRaizy… the winner could be you!!!

POSTSCRIPT: Well, I waited a week. More than a week. A couple of us doubted the veracity of David's story, but my older daughter piped up, "no, I totally believe that because Pesach products all come in weird bottles..." But it's been a week and a half now, and I'm going to have to pass on the prize to the next in line. I'm VERY sorry, and hope his cooking career is going better now than it was back then. Maybe he doesn't even NEED the cookbook!

SuperRaizy, please email me your details and I will have Artscroll send out the book!