The Internet is very GRAY today. 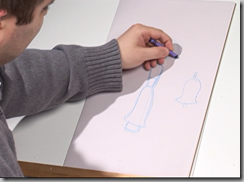 Can you see the artists’ sketch in this picture???  I can, too!

It seems I had my computer’s brightness turned up WAAAAAY too far.  For waaay too long.  In fact, I didn’t even know there WAS a brightness control on the computer.  Weird, huh?

I had suspected something was amiss, and every once in a while, I’d fiddle half-heartedly with the monitor controls in an effort to reveal more of the screen.  Frankly, I thought it might be my eyes.

I’ve been wondering why my blog background suddenly started being white… but too lazy and tired to do anything about it.

So you know how it is, and a few months pass that way… until tonight, when we were watching the above “how-to-draw” video (Veggie Tales!).  As the artist sketched the lines, they were literally vanishing into the big bright-white of the screen.

The sketch would reappear only when he held his body just right:  the part that was in shadow would mysteriously become visible, then fade out again as his arm moved.

Anyway, you’ll be relieved to know that it’s all good now.  The problem was NOT the monitor brightness control, it was the video driver brightness control, which can only be accessed through Control Panel.  Silly me, thinking there would only be ONE intuitive control instead of two or maybe even more!

But along the way, trying to capture the screenshot you see above, I ALSO solved a years-old mystery (well, it was a mystery to me – YM insists he knew how to fix it all along and even offered to help):  how to take a still screenshot (see photo above) from a moving video.

Regular “Print Screen” won’t do it – weird things start happening.  But if you go into the video player (we use VLC, but it works with Windows Media Player,  too) and turn off acceleration (overlay), it lets you do the screen capture just fine!

So I’ve solved TWO niggling technical difficulties for the price of one!!!

(but okay, grey is not necessarily a colour I need to see more of, with temperatures hovering right around zero outside…)