Well, as you may have read already, this has been a “light” homeschooling week.  We did some readin’ and writin’ yesterday, but the ‘rithmetic component has been sorely lacking.  With Shabbos coming in early today, there was no time for an organized lesson – so I settled for a disorganized one!

After I did a quick “stretch n’ fold” on the challah dough, I gave Naomi the big Judy teaching clock, asking her to set it with the current time (there’s a clock right above the table). 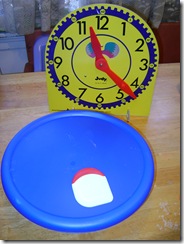 Then I explained that the dough would have to sit for one hour, so I showed her how to move the minute hand around until it was in the same position, one hour later.  (I was in a rush, or I would have had her do this herself!) 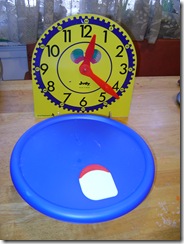 The last step was asking her to watch the clock and tell me when it got to the same time shown on the clock.  Unfortunately, by the time 12:20 rolled around, she was out of the room getting ready for her bath, so she didn’t notice on her own.  I did call her in to show her and explain that it had been exactly one hour.

The first part of the Judy book takes a lot of care in describing how long certain activities take, and helping kids develop a sense of the passage of specific units of time, so it was great when she exclaimed, “that was ONE HOUR?!?”

In just a bit more baking math fun, I explained a little bit about fractions as we were measuring half-spoonsful and quarter-cups of various ingredients.

And then, I had to leave the room while I was portioning the peanut-butter cookies.  With nothing to do until I came back, she did MATH.  As soon as I came back in, she announced “four threes make twelve!”  We haven’t started multiplication yet, but I said that was exactly right, and we did a couple of other threes while I portioned the other tray of cookies.

So there – we’ve had our math class for the week.  Effortless, painlessly… and deliciously!

Here’s some challah braiding fun to take you into Shabbos…

(there’s a Part 2 coming, with GZ being very cute; I’ll get that up after Shabbos if I don’t have a chance this afternoon) Here it is!!!