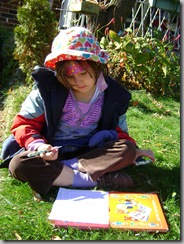 Sitting inside, especially when I’m sick, it always looks so grim outside; I look out the window and just want to hunker down under a blanket.

It’s a vicious cycle; I should know that by now.  Our house is SO chilly, damp and poorly-lit that I then continue to sit, feeling more and more miserable – and taking it out on anybody who happens to be around.

Finally, around 11:30 this morning, after a very late davening (I couldn’t stop sneezing!) and snacktime, I announced that we were going for a walk.

Got everybody bundled – pants, socks, shoes, jackets, hats (albeit summer hats)… even gloves for myself – and arrived outside to discover THE MOST GLORIOUS DAY.  It was not only far sunnier outside than it was inside (doh!) but actually about five degrees WARMER (we have an older house, and the walls do a pretty good job of insulating – something that’s very welcome in the summertime when the house stays pretty cool).

I grabbed a rake and cleared off the front lawn, while the kids did a whole range of things, picking raspberries and frost-ruined tomatoes, running around, jumping into leaves. 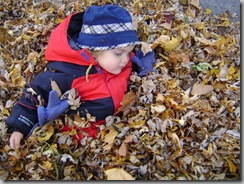 A long time ago, I got a parenting phrase in my head.  Maybe it’s from How to Talk So Your Kids will Listen?  The phrase is, “don’t foredoom them.”  Wherever possible, don’t tell them their plans won’t work or jump in to fix things… even if you know you’re right.

In this case, Naomi ended up pulling GZ in the wagon and wanted “something like a coach” to stand inside while she was pulling.  So after much deliberation – and several trips indoors to fetch toys to make GZ’s wagon ride more enjoyable – she rigged up this hula-hoop, and attached it to the wagon handle literally with a wadded-up napkin and a couple of small pieces of shiny tape.

I didn’t interfere in the process.  Yay, me!  I even went to grab my camera so I could photograph the ridiculousness of the contraption; maybe even get a picture of the Kodak moment when the whole thing would fall apart, as I knew it would. 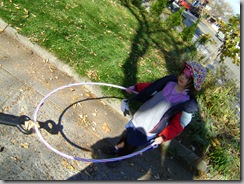 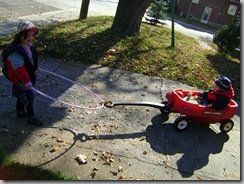 As you can see, her connection held, not only down the driveway, but for a very long trip around the neighbours’ driveway and back again.  It never came apart, the whole time we were outside.

She made me write down the names of the stops as she called them out.  After our house and the neighbours’ house, she ran out of stop names and started calling them things like “I just saw a butterfly Station” and “The Big Tree Station.”

My favourite was when she called out from the sidewalk, “Agora Station!”  I said, “what?”  “Agora!  Because of the Agora over here, with the pink flowers!”  “Oh, the gaura.”  And I wrote it down.

Later, I read back all her station names (there were 12; most were only a few feet apart).

I lay on my back for a while on the grass, basking in what felt for all the world like a late-summer day (if it weren’t for the dead coleus and the occasional breeze).

She stayed outside for about twenty minutes after I went in to make lunch.  That’s the photo at the top of this post.  In the picture, she’s carefully sketching a tiny, perfect illustration to go along with each of the twelve stops in her little railway line.

NEVER foredoom your children…. or the weather.