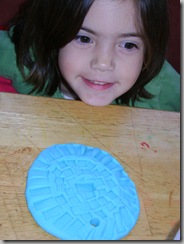 This was a math idea straight out of the Idea Book for Cuisenaire Rods at the Primary Level, but I saw it there last night and figured it was exactly what we need.

We’ve both been getting frustrated with math because Naomi Rivka’s handwriting isn’t good enough to do math with – her numerals are all backwards and even she can’t tell the difference between her 2’s and 5’s.  And we’re at a point in the Miquon Orange Book

where writing numbers is kind of important.  Argh.

(The backwards thing is probably my fault for introducing Hebrew and English handwriting at the same time.)

Anyway, I thought we’d take a break this week, or at least, today.  So despite a horror of salty homemade play-dough, and a love of REAL play-doh! I mixed up a batch of Cuisenaire’s suggested dough mixture.  I let Naomi choose the colour… and then we got to work.

Before we started on the main activity, I had the kids play around for a bit.  I had Naomi roll her dough into three balls:  small, medium, and large.  Then we made snakes:  small, medium and large.  Finally, I had her try to make two balls that were exactly the same size.

We weighed everything on the digital scale – perhaps next time, we could use the bucket balance for a different type of measurement.  I did the “Piaget-experiment” thing once she had her two identical balls.  I squished one flat and asked her which was bigger.  Then I made them into balls again, then rolled one out into a long, long snake.

She was continually astonished that despite the apparent difference in size, they both weighed the same.  She kept predicting that the longer snake would be “bigger,” but then the scale showed the exact same reading.  I remember doing those types of volume experiments in high school with my sister Sara, who’s 32 now.  Amazing!

Then, we were onto the main activity:  creating an ornament based on impressions of the Cuisenaire “math rods” into the dough.

This is actually a serious exercise where children learn, on some level, to “translate” 3-d rods into 2-d representations.  This is useful for understanding math symbols – ie the eventual transition from concrete manipulatives to paper-and-pencil math.  Not that the kids knew any of that, or cared.

I’m a model student; I was trying to do the exercise textbook-style, stamping various sizes of rods neatly into the dough. 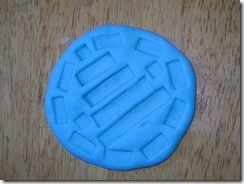 This was Naomi Rivka’s second attempt.  She made me crumple up her first try, which I hate (she’s learned from Elisheva the Perfectionist that if her work is less than perfect, it must be eradicated) but then she did a good job with the second. 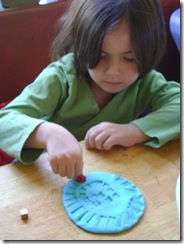 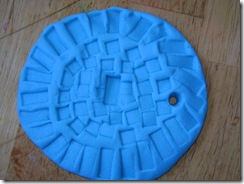 I “drilled” holes in hers and mine with a pencil so we could hang them up after baking.  When she saw the pencil, she got very excited and wanted to do stuff OTHER than press rods into her dough, but frankly, they use play-doh all the time, so I said she could do that later on if she wanted to.  She was okay about it, and stuck to the program after that.

And here’s Gavriel Zev’s special take on this activity! 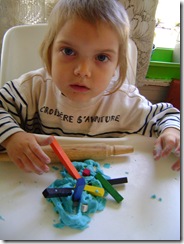 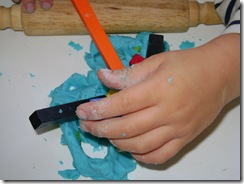 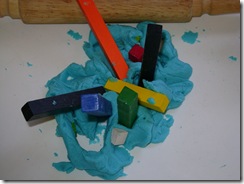 He later built a rod train and completely surrounded it by dough.  Took some doing to wash off all the dough afterwards.  I’m always thrilled when I can involve him in one of our “schooling” activities.  I have been thinking about his educational “needs” a  bit more lately, as I mentioned in this post.

But ew, if anybody has a recipe for homemade “play-dough” that doesn’t totally crud up your hands with salt… please, PLEASE let me in on it!!! 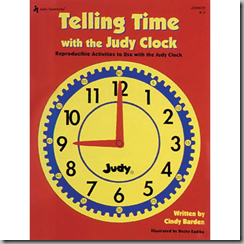 I must have been feeling “mathy” today because while GZ had his swimming lesson, Naomi and I also worked through the first couple of pages of Telling Time with the Judy Clock.

I like how this book starts out very casually, talking about time in general, about morning and night, and helping kids get to know how long certain activities take.  We’ll see how this thing goes when it gets into the numbers of it all…

Maybe tomorrow I’ll get my act together and actually plan our Week in Homeschooling!!!