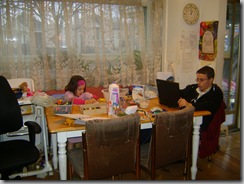 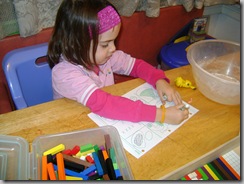 Following my new choose-her-own-Miquon philosophy, Naomi chose and worked this entire sheet almost without complaint!  Numeral reverals are still troubling her, and she gets very frustrated when I point it out, so I have backed off a bit. 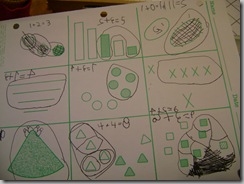 Rainbow Resources sells a Cuisenaire Rod Track and I decided it would be a good thing to have – two days too late to add it to our order last week.  The track itself costs only $4, but with shipping, well, a lot more.  So I decided to make one to tide us over until my next Rainbow order (this was only my third, so really, they’re not very frequent).

And here’s my DIY version! 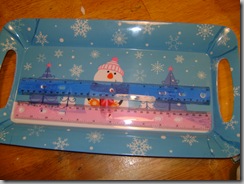 They didn’t have any trays that were a) this long, b) this sturdy and c) not quite so seasonal… sigh. 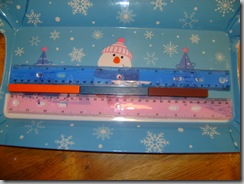 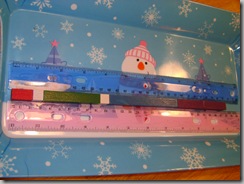 I hope it’ll look slightly less gluey when it’s dry, but really, I couldn’t care less.  We’ll have the real thing soon enough, no doubt.  It’s only $4, and looks way deeper than mine, so GZ would probably enjoy it for lining up his trains.

Speaking of cheap n’ cheerful, I was thinking more about sandpaper letters and quickly threw these together while Naomi was practicing Handwriting Without Tears today.  She did the ones on the right:  I wrote the letters with marker and she traced them somewhat messily with glue. 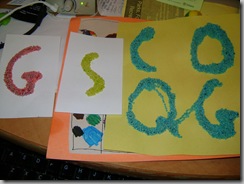 To make the raised letters, I used the dyed baby pasta I made for our Israel map project back in June.