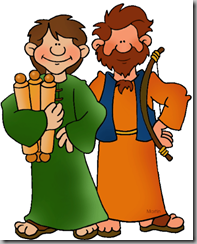 This is a basic overview of the Yaakov and Eisav story in a very traditional “Q&A” format, which can be easily reworked for young kids of any age. Answers in brackets are the usual or traditional answers, but I like this format because it lets you remain open to anything your child might have to say.

I’ve adapted this from the Toldos page of Parsha Pages for Sefer Bereishis at chinuch.org (by Ronya Friedman). We may or may not do this ourselves this week, but I wanted to be ready with a compelling narrative…

יעקב and רבקה were married, but they weren’t perfectly happy…

When we want something very much, what do we do? (daven)

What did יעקב and רבקה want very much? (a baby)

What did they do? (davened – they asked ה׳)

ה׳ answered their תפילות. They were expecting a baby!

Why was רבקה upset during her pregnancy? (her belly was always wriggling!)

When רבקה passed by a ישיבה, what would happen? (her belly would pull towards the ישיבה)

רבקה didn’t know what was wrong! So she went to speak to a צדיק.

What did the צדיק say? (You will have TWO babies – twins!)

He will be head of the יידען (בני ישראל)

He will be head of the גויים.

The two babies were born!

What did the first baby look like? (hairy and red)

What did they name him? (עשו – עשו means “made”, that means he already looked grown-up)

How was the second baby born? (holding onto the first baby’s ankle/heel - עקב)

What did they name him? (יעקב)

The babies grew up!

(the תורה doesn’t tell us much about that part)

When יעקב grew up, he loved to… (study תורה, do מצוות)

He was a צדיק.

When עשו grew up, he loved to… (hunt animals, kill people)

What was יעקב cooking? (lentil soup – for יצחק, because אברהם had just died)

Did עשו ask for soup nicely? (nope, he did not!)

What didיעקב answer? (yes, but first sell me your בכורה, your birthright)

Did עשו care about being the בכור and his special מצוות? (nope, he did not!)

Their father, יצחק, wanted to give a special ברכה!

יצחק was getting old and he had become... (blind – he couldn’t see)

What did רבקה do to help יעקב get the ברכה? (dress him up in עשו’s hairy clothes)

What did יצחק say when יעקב came instead of עשו? (“The voice is the voice of יעקב, but the hands are the hands of עשו”)

Did יצחק give the ברכה anyway? (yes, he did)

עשו found out when he got home!

How didעשו act when he found out? (he was furious; he wanted to kill יעקב!)

What did רבקה tell יעקב to do? (run away to her family in חרן)

And we’ll learn about that in next week’s parsha…