p.s.  If you have arrived at this post because you’re looking for decent parsha resoures, may I also (humbly) suggest that you take a look at a few of mine while you’re here…?  I write a Parsha Poem for kids each week, and I’m also writing a narrative summary/overview of each weekly parsha. 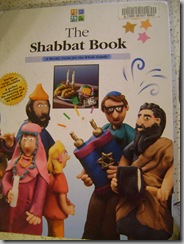 I wasn’t sure about The Shabbat Book: A Weekly Guide For The Whole Family

when we first got it out of the library.  Honestly, I thought it was some “light” Reform-style parsha thing.  Dunno; guess I shouldn’t judge a book by its fun clay-sculpture cover.

I am liking The Shabbat Book more and more as we read each parsha.  Eventually, we’ll have to return it, but I saw it in Israel’s for about $22 last week, so I may just have to buy it.  (they had a newer edition, with a slightly different cover, but the same inside)

For each weekly parsha, the book presents a VERY short, 1-2 paragraph summary, synopsis, or touches on a major theme (some of the parshiyos don’t have plots, as such).  There’s a clay-sculpture  illustration to match, and usually a sidebar with a Hebrew term, passuk or something similar to add depth.

At the bottom of the page, there is a discussion of a middah (character trait), mitzvah, or similar idea in Jewish thought, related to the weekly parsha. 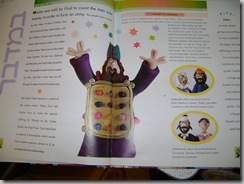 What I didn’t love:

As far as I’m concerned, the advantages – especially the fact that this is a parsha book that pre-literate kids can pick up and “learn” on their own with pictures – far outweigh the disadvantages, and this is a book worth acquiring for any kid’s Jewish library if you can afford it (ie if WE can afford it). 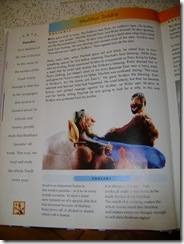 A couple more typical page views, with two parshiyos on a page: 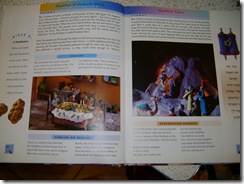 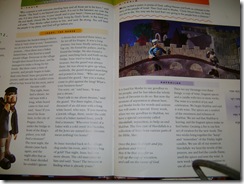 And a double spread for the start of chumash Devarim, illustrating the wanderings of bnei Yisrael: 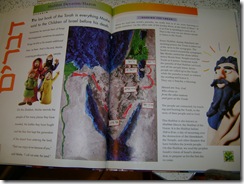 ISBN & copyright info follows if you want to find a copy for yourself. 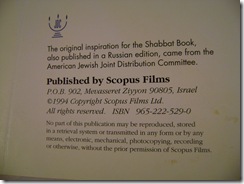