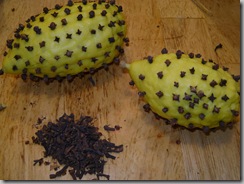 Okay, it only FEELS like sacrilege, the fact that I am taking my mother’s esrog and ours, which maybe cost over $100 just two weeks ago, and stabbing them full  of hard pokey cloves.

Boy, do my hands smell great.  And what an astonishingly relaxing way to pass the time when my energy hasn’t come back from yom tov, and I need to sit quietly in denial of all the non-Yom Tov work that must be done to catch up. 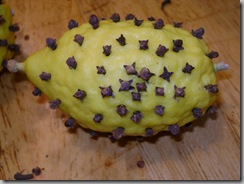 Traditionally, pomanders are made very neatly, with the cloves in nice, straight lines.  You can even draw the lines on with a sharp pencil – the fruit darkens as it dries, and they won’t show on the finished product.  I did one with “straight” lines (not pencil-marked); the other has the cloves arranged in more of a spiral pattern, which I did draw on, but it doesn’t show. 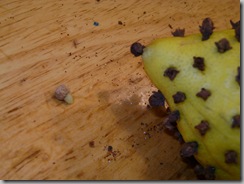 Whoops – knocked off the pitom!  Now it’s pasul… oh, yeah – it’s worthless anyway!  (that’s the pitom, lying on the table next to the esrog… I stuck a clove in to replace it)

Naomi and I used skewers to poke the holes (wooden skewer ends will turn to mush after a while, so you may need a few) and took turns for a while, poking and pushing in the cloves. 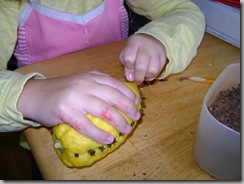 1)  Havdalah!  Many people use cloves anyway as besamim, and the esrog adds another dimension of hiddur (beautification).

2) Yom Kippur!  There is a custom to pass around an esrog pomander in shul on Yom Kippur afternoon for two reasons:

a) it revives the spirit (in Yiddish, a mechaya – it brings you back to life!), and

b) normally, we recite so many brachas on food and other things that we easily make the 100 brachas in a day that some say are mandatory, but on Yom Kippur, we are missing all our food brachas.  Smelling a pomander lets us recite borei minei vesamim, and gain an “extra” bracha.

(On a fresh esrog with no cloves,  you’d probably say the fruit-smell bracha, “shenosein reiach tov b’peros”, whereas with a shrivelled clovey pomander, you can’t really smell the fruit anymore.  For more information on brachas for smells – what a fascinating topic to procrastinate over! – click here and scroll down to “What Bracha do I recite on an Esrog?” (near the bottom)

Oh, man, I am so BORED by this craft… 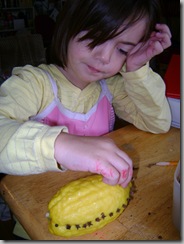 (she didn’t really get bored, but the hard cloves did start to hurt her fingers pretty quickly)

Speaking of hard cloves, the whole time I was doing this craft, I was sitting and thinking about the probably connection between the English word “clove” and the French word “clou,” which means “nail.”  Thinking about it, deciding it probably isn’t worth Googling.

But, hey:  if you didn’t know the French word for nail is “clou,” and that a u often changes to a v in the shift between languages, then feel free to Google it and see just how closely the words are related.  I suspect it’s no coincidence, but lack the energy to find out.