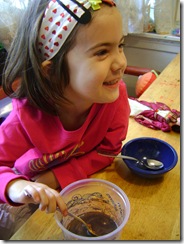 Does this happen in your family, too?

Around here, there is absolutely NOTHING in the middle between "don't look... go away... this is private!" and "Mommy, come look!  Look what I'm doing!  Come NOW!!"

Said, of course, with an urgency that tells you if you don't come right this instant to stare at the activity, your child's head is definitely going to explode.

After a few sessions of "Mommy, come and look!" this morning, Naomi fell curiously silent in her room.

After a while, she came out.  "Do you have any kind of dish with holes in it?"

Gaah!  Liquid in her room!!!!!!  I rushed in to discover a cooking class in progress - all her Barbies lined up watching her "cook" a mixture of hacky sack filling beads and cloves in a dish of water.

Actually, it looked like a great lesson - each of the Barbies had her own pencil and they were writing recipes.  (Later on, they'd progress to writing "number lines in French," and I was impressed by how straight and accurate Naomi's example number line was!)

But... but... dollar-store hacky sack stuffing???  What the heck is in those things, anyway?  It was a mix of two types of dubious bead/bean things:  small white balls that floated and larger red balls that sank.  And it was in her ROOM. 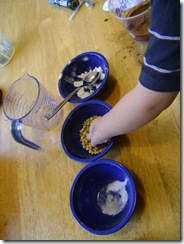 So I told her she could do it AT THE TABLE... with parent-approved supplies.  And Gavriel Zev decided to join in, too.

I gave them three dishes:  flour, sugar, and mixed-bean soup mix, a spoon for transferring dry “ingredients,” and with a measuring cup full of water. 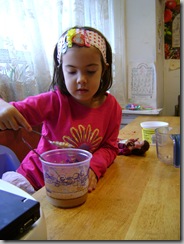 I gave them each a transparent plastic container and a spoon for stirring, and then let them go at it, stirring in "ingredients" to make their own concoction.

I did explain that their “recipes” wouldn't be good to eat, because of the raw flour and beans, but I let 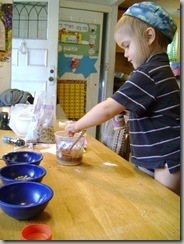 them taste them if they wanted.  Naomi had dumped in so much sugar that she actually thought hers was yummy, but Gavriel Zev had dumped a ton of cinnamon into  his and had to go rinse his mouth.

(note:  Yes, I know… I should really make him wear trousers a bit more regularly now that the weather’s getting chilly!)

They both had fun, and practiced fine-motor skills (scooping with a spoon, pouring, stirring) without even realizing it! 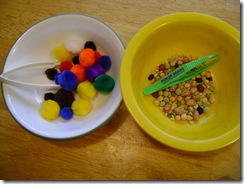 Our other "painless" sensory/motor-skill of the day was transferring.  Naomi on tweezers (I love these little plastic tweezers!) with the bean soup mix; Gavriel Zev on mini-tongs (they came from a Play-Doh set) with the pompoms.

Later, we glued pompoms to make characters and designs on paper.  We reused the bingo-dabber butterfly outline from last week – adding glue to each of the “dots” and sticking on a pompom instead of making a dot with the marker.