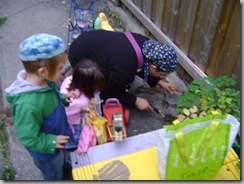 (many, many thanks to Ted for this lovely on-my-knees-in-the-homeschool-setting photo!)

Anyway, it’s TWO experimants, actually, although this really is a lousy pun, so I think I’ll drop it.

Let me start by saying today was a LOUSY ant day.  After an entire summer of tripping over ants everywhere we went, ants were pretty much nowhere to be found today – relatively speaking.

Ants, it is well known, live everywhere except where it is too cold to live.  And frankly, in a few weeks’ time, it will be too cold to live here, so I suspect most of them have burrowed down deep and won’t be seen again until spring.  That said, it was sunny and even a little bit warm (maybe 20°?), so I went out with moderately high hopes.

Naomi brought two things from the kitchen:  honey and mustard.  We blobbed them on the sidewalk near the backyard.  And left them there.  Which will the ants prefer? 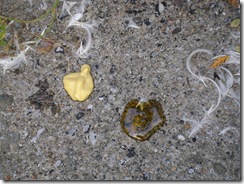 (ignore the feathers… usually a lot of feathers means that somewhere nearby a bird is lying dead waiting for me to discover its horrific remains, but in this case, it just means GZ peed on our duvet and Ted took it outside to air)

Meanwhile, we were on to… 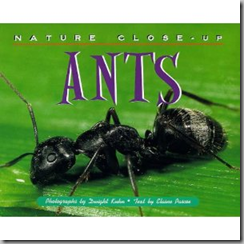 Read out loud the section on setting up an ant colony.  Read up on catching ants.

Head out to the backyard, watch ants, trap a couple in the baggie, then head out to the sandy playgrounds across the street, where I figure there will be millions of ants just screaming “trap me!”

Look around at the playground.  No ants.  Kids play for a while as I search frantically.  No ants.

Head to the other playground, around back, which is ALL SAND.  No ants.

Finally, finally, I found ONE ANT.  I followed it for about ten minutes and finally spotted another ant, and another one:  the colony!  I quickly dug in with the trowel and scooped up a couple of scoops worth of ants and tossed them in the baggie, dirt and all.

Naomi was fascinated.  She came over and continued to dust the remains of the nest for about ten minutes, insisting on repeating the word “pupae.”  “I don’t want any larvae because they’re boring – I only want pupae.”  She has the makings of an evil genius, I think.

Came home, dumped the whole bagful of dirt, with only a couple of mishaps, into the jar (all transfers of ants were done outside on the driveway!).

Remember, the giant acetaminophen bottle is in the middle, so there is only a very thin area for the ants to live.  Hopefully, this will let us observe them building tunnels.  To improve the odds of this, I covered the whole thing with a plant pot. 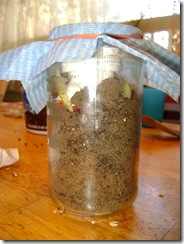 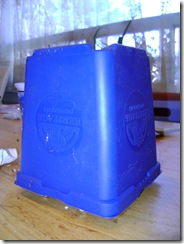 Finally, just before we went to my mother’s house for supper, we returned to…

Experiment One:  What DO the ants like to eat???

Well, the honey, of course.  The honey spread out a lot more than the mustard, but it also attracted something like 1/4 of a gazillion ants.  The mustard attracted exactly ZERO: 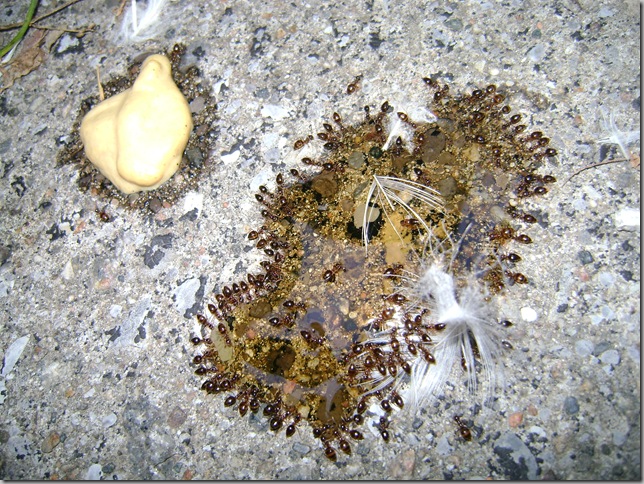 Me:  “Why do you think they prefer the honey?”

“Because it’s too yucky.”

So there you have it… the scientific process in action.

Any ants you see here in the honey are doomed, of couse.  They were totally stuck.  But there was also a trail of ants which we followed right to the edge of our property (that’s actually what I’m doing in the photo at the very top).  I guess they were more sensible and only lapped at the honey instead of diving in.

The ants on their way to the honey were very thin and the ones on their way back had suspiciously bulgy abdomens.  I think they ought to make most of us repeat kindergarten every twenty years or so.  This stuff is so basic, but it’s so much fun; after a while, you forget how much fun it is to just dive in and LEARN.