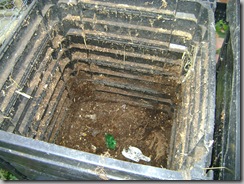 On Friday, the kids and I went out back and, in shame, I dismantled the garden.

It was a time for confessions:  I didn’t do enough, I didn’t care enough, I didn’t water enough, I didn’t chase the bad guys away (weeds and bugs).  I let stuff go see that really shouldn’t.  I let the brutes (bee balm, perennial sunflowers) take more than their allotted space.  I let beloved plants die through neglect while I baked breads and cared for my family instead. 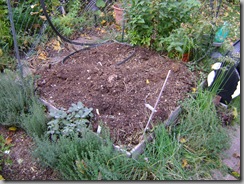 It was also a time for catharsis:  sure, I didn’t do enough all summer, but I’m not going to take this Fall thing lying down!  I tore out the pathetic, bitter-tasting tomatoes, the shrivelled, aphid-infested kale and rampaged at the weeds that had dared encroach on the square foot beds.

And finally, it was a time for hope.  I emptied one composter; dumped rich finished compost on all three beds and all around the garden.  The little kids seeded the square foot beds with a birdseed cover crop.  And all of this year’s ruined plants are now in the composter, ready to “feed” next year’s better garden. 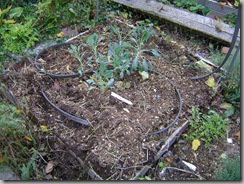 There’s something really nice about a clean slate garden – ready to grow again next year.  (okay, almost clean – I left 6 dinosaur kale plants, in case they want to grow now that the bean tripods are no longer shadowing them)

Birdseed is a useful way for home gardeners to experiment with cover cropping, or “green manure.”  In organic agriculture, a legume or other enriching crop is often sown at the end of a standard season or rotation. 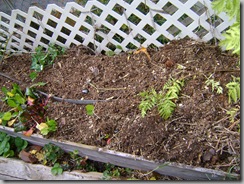 Home gardeners don’t usually have access to cover crop seed, as it’s sold in huge, bulk quantities by farm suppliers, but inexpensive birdseed is mostly millet, which makes a decent cover crop.  (Avoid brands that include sunflower seeds, however – wish I could remember why…)

Unfortunately, millet is killed by frost and snow, which makes it an attractive cover crop because it can just be tilled under in spring.  However, it makes it unattractive for sowing in late October because it may be a) too cold for it to sprout, and b) too close to frost to make it worthwhile.  We shall see.

Next year, I fear, I won’t have the luxury of a warm, sunny day to do my fall-cleanup.  Sukkos won’t even be over yet this time next year (and no, I don’t mean mid-Cheshvan!) 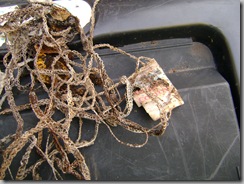 SO… cuz I knew you were wondering:  what WAS this mystery object???

There were two guesses:  bra and underpants.  One person guessed that what was left was the elastic from the bra.

It was actually an undershirt, the T-shirt kind.  I think it was a very old, ratty one of YM’s that I tossed into the composter last year to see what would happen.

I was utterly amazed to haul THIS out from the bottom of the composter on Friday.  It’s not elastic, though… it’s the polyester serging-thread that joined all the seams.  The shirt may be gone, but the plastic bits – the label, the thread – will last forever.

Nobody seemed to want it for a prize, though, so I think I’ll just throw it away.