Other posts you may or may not want to read: 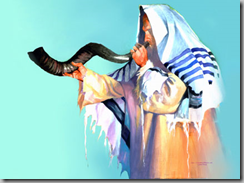 I have been incredibly naive.  Because I thought there were a FEW of these sites; a few fringey Christians scattered here and there who were selfishly appropriating Jewish symbols, language.

It turns out there are thousands of “Torah Observant Believers in Yeshua,” as they like to call themselves.  And many – perhaps because they don’t fit within mainstream Christian schools – are homeschoolers. 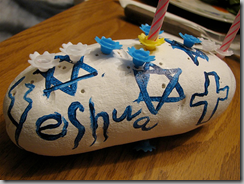 First reaction?  I feel so sad for their kids.  I won’t post links here, but one site has a video of two little girls who have obvious spent weeks memorizing Psalm 23 (Mizmor l’David).  They look so proud of themselves, but their pronunciations are so non-standard as to be unrecognizable by a Hebrew speaker, and, like all of these folks, they insist on pronouncing any Godly names they come across in somewhat bizarre ways.

These kids have no spiritual home – no place within Christianity (which mostly holds that Torah observance was superceded by Jesus’ atonement) or within Judaism (which holds that as believers in Jesus, whatever they call him, they are Christian).

Many of these blogs (a quick Google search will help you find them if you must) have been super-active lately because of the yamim tovim, which, I suspect, is one reason people take on “Hebrew Christianity” to begin with.

Stripped of its saints’ days and minor feasts, the mainstream Christian calendar is a drab one indeed.  Just as stripped of its majestic Latin mass, its Greek roots, pared down to its Protestant essentials, Christian worship often simply fails to stir the soul.

At the same time, I recently met somebody online who is a struggling Bas Noach – she’s looking for community, looking for homeschool resources, looking for directions.

What’s a ben/bas/bnei Noach?  A person who honours the Seven Noachide Laws.  Google it for more information, but basically, it’s Torah belief and observance – for non-Jews.  There are seven simple laws all non-Jews are supposed to follow, and Noachides are mostly ex-Christians who have become dissatisfied with Christianity and seek something simpler and more true.

And it IS simpler, and more true.  But I feel sorry for their kids, too.  Bnei Noach are probably fewer and farther between than Hebrew Christians.  This woman basically wanted to find books that explain Torah from a Jewish perspective without saying anything outrightly Jewish, because they’re not Jewish. 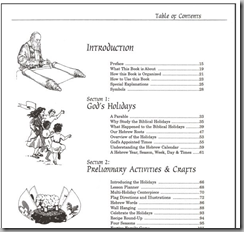 Frankly, that’s tough to find.  Liberal books and other resources are short on Torah, and the more frum you get, the more you get the feeling from books, CDs etc., that you’re being drawn into an exclusive club.

But failing a huge increase in the numbers of Torah-believing bnei Noach, it seems also to be a lonelier route to heaven, as your family quizzes you about why you no longer believe in Jesus at the same time as suspicious Jews wonder what you’re going to do with their Torah teachings.

Hebrew Christians don’t seem all that lonely, to be honest.  Perhaps because there are plenty of them, or perhaps they also participate in Christian churches.  To me, they also seem more than a bit smug.

Perhaps other Christians around them believe they are MORE Christian because of their bizarre Jewish terminology and rituals.  Like speaking in tongues, only it’s the HOLY tongue! 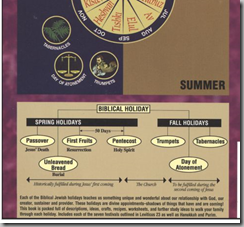 Do they feel like they’re getting closer to Jesus by speaking his language?  Though how Chanukah comes into it, I’m not sure.  In fact, many of their Jewish customs post-date Jesus by centuries.  Modeled on a Rabbinic Judaism that didn’t exist in his day, much of the modern Jewish prayer service would thoroughly confuse him if he were to come back to life today.

Ha ha ha ha ha.  Not that he’s going to, but they sure do seem confident that their careful mitzvah observance (which he himself may have actually condemned) will help bring him back.

I’m trying to be respectful here, but on a few final points, I must state loudly and clearly, just in case any Christians (yup, you, too, believers in Yeshuah!) happen to be reading this:

* Shofar:  BOY do they love shofars and shofar imagery, because, of course, it’s totally tied up with the “shofar gadol” messianism, even within mainstream Judaism.  Give ‘em an inch and they’ll take a mile… or something.

I welcome your comments and questions.  Moderation is on to block spam, but I will post all legitimate comments, even if I do not agree with your views.