Our mother brought us presents,

Back from the presents store.

You know what they’re for.”

We knew our birthdays were coming,

We hoped we’d see them then;

But still, we wanted them right NOW,

The presents were stored way up high,

Teetering up on the shelf.

“Don’t touch them or you will get hurt,” she said.

But I did it all by myself.

And look, we did it safely!

Neither of us was in pain.

I pulled down one of the presents,

And climbed on the chair once again.

This time I wasn’t afraid at all,

I knew I wouldn’t fall down.

We knew that our mother was wrong about that

And now she had gone out downtown.

The second present tumbled down,

With a boom and a crash from above.

This gift from our mother with love.

“Let’s look at this one first,” you said,

So I climbed down to take a look;

To peek at the very first present,

We opened the very first present;

But I didn’t know and I told you so;

I had no clue what it could be.

It had buttons and bells and paper,

It had batteries and an alarm.

We pulled them all out and stacked them,

But we just couldn’t see its charm.

“What a terrible gift!” I said,

And that’s when we heard going past

The footsteps outside in the hallway

Our mother was back home at last!

We rushed to hide the torn paper,

We rushed to cover the gift,

But there was no way to hide it

With our actions, all clumsy and swift.

The door creaked and then she was there,

Our mother so angry and grim;

We both pointed to each other

“And I see that you’ve broken the toy.”

“It cannot be fixed,” she told us,

“And it would have brought you much joy.”

She sent us out and scolded us,

As we cried for the present that broke.

“Now you won’t get the other one either,”

She told us, and none of us spoke. 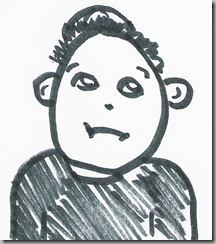 “Your birthday’s coming,” our mother said,

“But you’re going to have to wait.”

We’d lost our chance at the gifts we had

Now we would not celebrate.

“You’ll have your party soon,” she said,

“And I still have a gift that’s quite nice.

But you’ll have to be good and work for it,

Because you ignored my advice.”

In Bereishis, Hashem gave a gift,

A life in Gan Eden so fine.

Adam and Chava were told not to taste,

But they both said, “that fruit should be MINE.”

So Hashem sent them out,

From Gan Eden, so sad;

He said they must work at a regular life

To accept all the good and the bad.

But He still has a gift waiting for us,

A life that is wondrous and sweet.

All of the things we can dream of,

And all that we want there to eat.

The time when we get it seems very far off

And it feels very hard just to wait.

But Hashem keeps his promises; that’s how we know

That He’ll bring us all to that date. 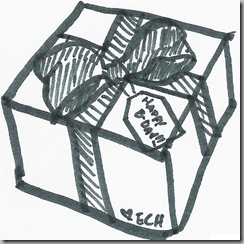 Adam and Chava made a mistake,

So He took their present away;

That he’ll give it back – someday.

Big shout-out:  All illustrations by Elisheva!