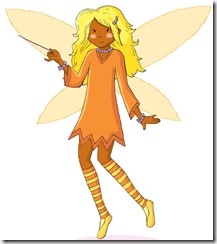 I’ve read so much about black girls’ self-perception and the idea that lots of black children (and adults) feel that white people are inherently more beautiful.

Am I the only person in the world with a white daughter who wishes she were black?  Or at the very least, what she refers to as “Persian” – a halfway “mocha” tint that Elisheva, who has little awareness of politics, so it’s cute coming from her, refers to as “Obama-coloured.”  (she must have heard it somewhere)

(Naomi calls it Persian because of Disney’s princess Jasmine, who I have speculated lived in Persia…)

She is obsessed with the Rainbow Fairy books – just the covers, since I refuse to read her the books – and “created” this fairy, whose name is “Hannah, a flower and dancing fairy,” at the publisher’s website.  I have used Hannah as the cover for a “book” of photocopies of the Rainbow Fairy book covers I made her.

(mostly so we could return the actual books to the library – we had about 20 of them out at once!)

This is not just a one-off:  any time we have any activity where she has to choose a skin colour, she goes for the darker shades.

It’s not that she hates her own skin colour… she just believes, I think, that the darker tones are inherently more beautiful.  Exotic.  Lovely.

Although I shudder to think about more Barbies, I think I know what colour her next one should be…