Note:  This week’s parsha also deals with the Seven Species.  For posts on that topic instead, click here (Parsha Poem) or here (link to a video). 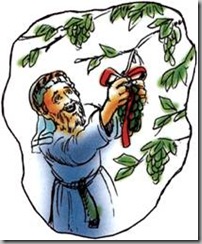 All of Sefer Devarim is Moshe’s last speech,

The words that he wanted to tell and to teach.

He wouldn’t be leading us very much longer,

But he wanted us still to learn and grow stronger.

When he spoke to the people, he stood at the front,

Gathered us all, for he had to be blunt.

But in this week’s parsha, Ki Tavo, we’re told

He told them about what the future would hold.

Before going up into Israel at last,

Hashem would give one final test to be passed.

On twin stone mountains, we’d all have to crowd

To hear blessings and curses shouted out loud.

Mount Grizim for half the Jews to gather on that date;

Mount Eyval for the rest of us, to listen well and wait.

And “Amein” from each side of the mountains we’d yell,

While our elders would stand in the middle and tell.

They’d tell of a bracha, a blessing so sweet,

Or a terrible curse you’d never want to meet.

What sort of blessings did Hashem want to send?

Happiness, babies and joy without end.

So why would he threaten to send us a curse?

In case our behaviour, if bad, would get worse.

We’ll plant seeds, He warned, but harvest no crops;

See nothing but empty shelves in the shops.

And poor people begging, so great is their need.

For running around and acting all wild,

Hashem also says, “I expect you to behave,

The Torah to keep and the mitzvot to save.”

Hashem had looked after us all of this time,

Fed us each day and kept us from grime.

But now, Moshe told us, we were ready to stand

On our own feet in our own Holy Land.

It’s easy, he said, when you’re working each day

To forget it’s Hashem who shows you the way

It’s easy to think you did it all by yourself 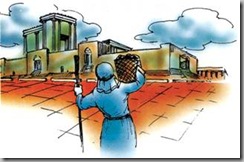 When you reap all the veggies lined up on the shelf.

But this parsha tells us Hashem has a part;

Hashem fills our baskets; his words fill our heart.

So be grateful for all and just thank him each day;

And may it only be brachas Hashem sends our way.

(images are from an old issue of Olomeinu, courtesy of Chinuch.org’s clipart archive)